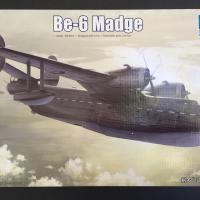 Developed from a prototype first flown in 1947, the Beriev Be-6, NATO code name “Madge”, was an amphibious, twin-engine, maritime patrol-aircraft. Its most prominent feature was the graceful gull wing design. Powered by two Shvetsov radials rated at 2,300 hp each, the Be-6 was capable of carrying a variety of weapons such as mines, depth charges, and torpedoes, in addition to its 5X23mm cannon armament in the tail, topside turret, and nose positions. The early version had a retractable radar pod behind the rear step. Later versions replaced the stinger guns with a magnetic anomaly detector (MAD) boom. The Be-6 served with both the Soviet and Chinese navies. A few soldiered on into the 1970s before the type was finally retired from service.

The model is packed in a stout top opening box with a nice painting of a Be-6 patrolling an unknown sea channel. Oddly enough the box art doesn’t depict the decal options that come in the kit. Inside you find six sprues of grey parts, and three clear sprues. Casting quality is top notch. Refined panel lines throughout and beautiful clear parts with fantastic frame detail to ease masking. Every tiny window is replicated in clear plastic. All control surfaces are separate parts allowing you to get creative with their positioning (except the flaps). Beaching gear is included if you want a land based bird. The decals sheet offers two options for yellow 43 with the Soviet Navy or 9053 with the Chinese Navy. A Double sided-single sheet painting guide printed in color complements the twelve-page instruction book.

The first step is the construction of a complete interior section including the cockpit electronic sections and gunner positions. It’s so comprehensive the first seven steps of the instructions are devoted to its assembly. This is a really nice feature of the kit however you won’t see most of it once the fuselage is closed up. Color references are sparse consisting of black and grey. A decal represents the instrument panel. No seat harnesses are provided. The instructions would have you assemble the flying surfaces next before completing the fuselage. I didn’t do that and instead installed all the tiny individual windows before closing the fuselage. I was impressed by the precision fit of the windows. Dry fit them first because there is one right way to orient each one. If you are installing the beaching gear, make sure to drill out the mounting holes before closing the fuselage. The fit is excellent, especially the clear part (GP32) that makes up the cockpit windows. In fact the fit of all the parts was excellent. So good that I painted the wings, tail surfaces and outrigger floats as separate parts before final assembly. Trumpeter provides a nice complement of weapons for six under wing hard points. The one thing missing is the radar pod that extended from underneath the rear fuselage behind the step. Its implied with some engraved panel lines but no parts to model it extended. The beaching gear is of the same high quality as the rest of the parts. I elected not to use them.

You have two options for finishing your Madge, a green over light blue Soviet example or a sea blue over light blue Chinese Be-6. Using the color chart provided I elected to do the Chinese version. The upper color is Tamiya XF-17 Sea Blue and the lower Tamiya XF-8 Flat Blue. The topside color looks fine compared to the photos I found on the web but the bottom blue doesn’t match any of the pictures I found of either version. Both appear to have a much lighter blue. The color diagram and the box art also show more contrast than the color in the paint chart. I decided to use it anyway thinking I could do a very light coat. I pre-shaded the panel lines and airbrushed both colors. In retrospect I would use a lighter blue since the contrast is just not what it should be. To prepare for and protect the decals I tried two new products from Alclad, Gloss Klear Kote (ALC-310) and Klear Kote Flat (ALC-314). I found both to be excellent products but heed the warning about ventilation; this stuff has a strong odor when it’s airbrushed. The balance of the painting was done with Tamiya rattle can spray paints and a little brush work. The decals went on with very little trouble. The waterline stripes are one piece but I cut them up to ease the process. There are extras included in the event one doesn’t go on as planned. I weathered my Madge with oil colors. My original plan was to set it on a water base of resin but deadlines must be kept so I didn’t get that far.

This kit is very impressive. The quality and fit of the parts is top notch and while the interior detail is mostly lost when the fuselage is closed up, it’s cool to know it’s in there. Would have been nice to include the radar pod as an option but I’m betting the aftermarket folks will handle that. The color references are good but don’t use the blue in the color chart on the underside. This model is recommended for 14 yrs. and up. That’s about right. All those tiny windows would challenge an inexperienced modeler. It appears at least two other companies have produced kits of the Madge, but it’s hard to imagine them beating this effort from Trumpeter. On a scale of 1 -10, I rate this one a nine for the color call out issue. The only reservation some might have is the price. It’s listed at $120 dollars although I found them on the Internet for as low as $80. That’s still a big investment for some of us.

I want to thank Stevens International for providing the kit, and IPMS for sending it my way.