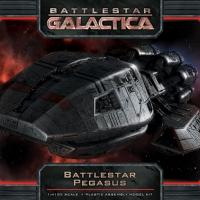 The Pegasus is either a Mercury class Battlestar or a Pegasus class Battlestar, depending on where you source your information; she is newer, larger, and more powerful than Galactica. In the re-imagined series, the Beast, as she known by her crew, is a survivor unexpectedly found by Galactica in the 10th episode of the 2nd season. She’s almost twice the size of Galactica but only needs about half the support crew, relying on more advanced automation systems. Utilizing these automation systems, the Pegasus could manufacture her own Vipers and Raptors, plus replenish stocks for the Galactica.

Her Captain, Admiral Helena Cain, and her crew were battle-tested and wanted payback after escaping the Cylon invasion. They were entirely motivated by bloodthirsty revenge and didn’t want to be tied up aiding the Colonial survivors, and, yes, this made great television entertainment. Sadly, the Pegasus was destroyed a few episodes later… or was she?

My sample arrived in a somewhat large box featuring an impressive bow shot of the Pegasus. A photo of the two Admirals, Adama and Cain, with Starbuck standing behind them, adorned the side panels. On the bottom side there’s a product flyer with a story, ship brief, and photos of the completed model. Under the flyer (held in place with gummy stuff) is the bottom of the box, or the advertised “printed backdrop.” The flyer is a little misleading, showing 2 pictures of the completed model over a different, larger, more suitable “printed backdrop”. Inside the box I found a very nice decal sheet, the instruction booklet with the BSG series trademark clipped corners, one display stand with a metal rod, and lots of poly package plastic. All the parts were well protected and very large. The completed model measures over 16 inches long by 6 ½ inches wide. I found the level of detail acceptable. The parts had very few sink marks despite their large size. There was some very thin flashing around the smaller parts. Also, there’s a small fret of clear parts for the engine exhausts.

I first did my initial test fitting of the major parts and was amazed at how well everything seemed to fit. The build process is like building a sandwich; it’s basically stacking parts together. The flight bays were the first main sub-components that I stacked (the flight deck decals must be added before assembly). These two sub-components were the only ones that needed extra work. The three main support pylons on each one had nasty seams that required lots of filling and filing.

The eight engine nacelles are made up of 4 parts each, one being clear for the exhaust exit. The rear section, or FTL Drive, features eight conduit pieces that are a little tricky to fit into place properly, but it can be done. The upper forward hull and upper main hull were joined together first before stacking the rest of the forward section together. Also, the top and bottom halves of the forward section have inserts that are a little sloppy and need to be centered in the openings. The FTL Drive fits inside the aft section of the main hull before joining the two halves. Once all the stacking was finished, I built up the eight two-piece engine ducts. These were a little annoying because the joint seam ran right through the only detailing on the darn things. After that, I was left with adding the engines and those pesky little engine ducts to the main hull. I then did all the major painting before adding the flight decks, and they fit great. The stand was the last item, requiring only the insertion of a metal rod.

IF BSG is your bag, then you need this iconic ship of the series. It’s a great kit and looks very impressive when completed. I had the whole thing constructed in about eight hours on a Saturday; painting took a little longer. I highly recommend it.

Thanks to Moebius and IPMS for the opportunity to build, review, and present such a fine model kit.

What you think of when you read "printed backdrop"

The printed backdrop actually on the box bottom

Kit closeup against backdrop
Previous Next