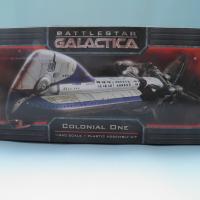 Back in 1978 I was one of many in the TV room in Langford Hall at Montana State University waiting for a new TV series that was trying to capitalize on a surprisingly successful Space Opera that had opened the previous year. That TV show was Battlestar Galactica and while it only lasted one season it gave us new ships which Monogram released as models.

Moebius Models picked up the license for this new series and had been releasing kits of the ships including the newest, Colonial One. This ship was a smaller passenger ship operating under the call sign Colonial Heavy 798. It belonged to Intersun Luxury Liners and had the distinction of carrying the last surviving member of the Colonial government thus leading to the Colonial One call sign and a paint scheme reminiscent of Air Force One.

But enough background, let’s see what we get in the box.

The new kit comes with 55 white plastic parts and 4 clear parts which includes the 2 piece standard Moebius stand. The finished model is 10 inches long. There is a touch of flash on some of the bits, mainly around the window areas of the sail and some on the fuselage but nothing too extreme.

Besides the instructions and a nice set of decals you also get a 5” x 8” print of the original design.

The kit gives you the option of posing it in flying mode or landed. There are rear landing legs as alternate parts so make sure you pay attention to the instructions when you are building. You also have the option to pose the engine blast guards in folded or fully deployed mode, but all the pictures and videos I can find show these set at a 45 degree angle when in flight so you need to modify the parts and add them at the end of the build.

One other bit to watch out for is the forward landing gear. It is molded deployed on the kit and you have to cut it off and add it back for the inflight mode. This is spelled out in the instructions but is easy to miss if you are just skimming along.

I decided to build the kit in Colonial Heavy 798 markings, before Rosalyn became the President. This mainly just means not applying the Colonial Shield markings to the sail.

The paint guide in the instructions leaves much to be desired and was the low point in this kit for me. Basically it says White for the upper hull, Light Blue for the lower hull and Gray for the engines. That is the full extent of the color guide. There is a note advising these are general guidelines and you may want to do more in depth research for greater detail. Oh well.

The two main engines also had some large gaps along the seam lines that needed putty.

I had some large seams along the rear of the sail where it meets the fuselage so I tried something one of the modelers I follow on Facebook uses called Tulip Fabric paint. I picked up a bottle at Walmart. First impression was it didn't work too well not really filling the seam area so I used some regular Tamiya putty in a couple places and did another coat of the Tulip along the sail to fuselage seam. While that was drying I assembled the other engine bits and the landing pod/wing things (technical terms).

Once the putty had been sanded down I sprayed the fuselage Flat White.

As I was gluing on the nose gear in the up position I looked at the instructions and found out I went a bit too far when I had modified the piece after cutting it off. There are a couple of pieces in the kit that represent the gear up so had to remove the modified part I had added and replace it with the kit supplied parts. Much smoother look with them. Go figure.

Next up was looking at how to modify the engine petals (more technical terms). The kit gives two options, fully opened or fully closed. But I wanted to set them at about a 45 degree angle to match the look of the show. Looking at the parts I picked the option that was fully open and cut off the mounting tabs. Then stuck it in the hole in the fuselage and bent it back until I got it close. Same for the other side. The top and bottom ones have a different mount so I just stuck them in the appropriate holes and again bent until I was satisfied. These were then added at the end of the build.

I masked off the body and painted the back end Tamiya Dark Ocean Grey. Then more masking for the light blue bottom. I warm up the spray paint so it flows better (at least, I think so). Just run hot water into a container and let the can sit for a couple minutes. Next I sprayed the engines/landing gear and the engine vanes in Model Master Camouflage Grey. I tried some detail painting on the engines and even put some Tamiya Clear Yellow over Silver on the pod engines to give a little glow. Really would have liked better painting instructions. Finally the belly was sprayed with Tamiya AS-5 Luftwaffe Light Blue. I painted the window frames on the clear parts and the surrounding area with Vallejo Dark Prussian Blue 70.899 as recommended by someone else. I think it is a bit darker than the decals but close enough.

I decided to start with the small bits that go on the engine pods and the engine petals. These worked ok after I trimmed them close, though the engine ones did need some Micro Sol to settle down.

The long markings on the sides had me worried because they are two separate decals, one for the blue and a thin gold stripe. I thought about cutting them into bits but since I was doing this for a review figured I would try as is. I decided that it would be easier to get the gold stripe added and then put the blue one on so everything would line up. Well, the stripe came off the paper in the water (these all released very quickly so be careful) so now I had to try to figure out which end had the curve and then get it on the model. After much wrestling and Micro Set later I finally had it looking good. Was just a bit long so cut off the overhang and now on to the blue stripe. This is thicker so easier to manage but as I was looking at the decal I noticed that there was a lot of extra color below the windows. In fact, too much for the gold stripe to sit below it and have the windows line up. Looking at the instructions again the blue stripe was #3 and the gold stripe #5 so looks like the blue should have been put on first and then the gold added "over" it. Great (ok, not the actual Anglo-Saxon verbiage I used). So now what? I had the gold on the model and the blue soaked and ready to go. So some more Micro Set and I moved the gold decal down to the lower fuselage side, placed the blue stripe and then worked the gold stripe back up on top. Yeah, pretty much what you would expect but I got it close. A good healthy dose of Micro Sol to get the stripes to settle over the details and called it a night.

The next day I tackled the stripes on the other side. This time I started with the blue stripe and then put the gold over the top. That actually worked ok except the gold stripe broke several times while trying to place it. Once all was in place I used Micro Sol again and took one more day to recoup.

The next day I managed to get the rest of the decals on the sail and the Intersun markings. Micro Sol was again needed on the sail decals. They don't quit match up so more paint was needed for touch up.

I added the engine pods and that was that. Really need to do some weathering, especially around the engines and some kind of color for the windows but at this point I am just going to call it done.

Overall I was not happy with some of the fit, the lack in the instructions, especially regarding painting the engines and the decals, but where else are you going to find an injection molded Colonial One kit. With care it does build up into a good representation and would be a good kit to add lighting after drilling out all the fuselage windows.

One other thing. The kit includes optional decals for Eversun Luxury Liners. In the miniseries the logo on the paperwork and uniforms is Eversun but the CGI model had Intersun.