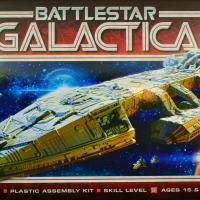 Airing in 1978 and 1979, with a brief return in 1980, the original Battlestar Galactica (BSG) television series laid the foundation for a follow-on series of books, games, and reimagined series of television shows chronicling humanity’s struggle to survive after the Twelve Colonies of human civilization were all but wiped out by the treacherous cybernetic Cylons in the attempt to rid the universe of human life. Despite the limited run of the original TV series, BSG has remained a popular franchise among Sci-Fi fans for three-and-a-half decades.

In honor of the 35th anniversary of the original series (TOS), Moebius Models has released a series of kits depicting craft from the 1978 production, with the flagship being Galactica herself.

Unlike prior and disappointing incarnations from other manufacturers of kits depicting the lone surviving battlestar of the Colonial Fleet, Moebius gets this one right on almost all counts. Reportedly having used the restored studio model as a reference, Moebius convincingly captures the size, shape, proportions, details, and subtleties of “Big G” with great effect.

With a box absolutely crammed full of stout styrene parts, the Moebius TOS Galactica is molded in off-white and is packed with crisp detail from stem to stern, very closely resembling that of the studio model. A clear piece is included to aid in simulating the telltale blue engine exhaust openings. A sheet of decals is provided, with names for all of Galactica’s sisters which met their fate at the hands of the Cylons. A chrome plated steel dowel and round styrene base build into a sturdy and attractive display stand for the finished model.

Assembly of the kit is straight-forward and is aided further by excellent narration accompanying the illustrations in the instructions. Assembly sequence was logical and flowed well, organizing the build into subassemblies. In general, fit of the thick parts was surprisingly clean and incident-free, although some sanding and filling were required to mitigate minor gaps between joined subassemblies and between some of the elements of the assemblies. In all, assembly time only took around 3 hours.

After applying a clear gloss layer, decals were applied using the MicroScale System. Decals posed the first real problem with the kit. Although some settled into the surface detail with some scribing and repeated applications of Micro Sol, others proved stubborn and did not settle or adhere well without significant manual intervention and prodding with fingernails and toothpick tips. Also, although applied over a smooth gloss surface, the “Galactica” name markings on the flight bays give hints of silvering when viewed from some angles.

Although the kit instructions suggest weathering was not needed (nor authentic to the original studio model), I chose to use Vallejo Dark Gray armor wash to highlight panel lines and to help the surface detail “pop” a bit more for average-to-poor room lighting conditions. After several sessions applying the washes from stem-to-stern, a final coat of flat clear with a couple added drops of Light Ghost Gray was applied to give the final result.

After decades of disappointment with BSG kits, Moebius finally has stepped up to the plate with this definitive replica of the TOS Battlestar Galactica. I highly recommend this kit for BSG fans with some modeling experience – really from “advanced beginners” on up.

Many thanks to Moebius Models for the sample kit and for finally producing a TOS Galactica that actually looks like the original in every way, and builds very quickly and cleanly! Thanks also to IPMS/USA for the opportunity to review the kit and enjoy a bit of late-70’s sci-fi nostalgia along the way.