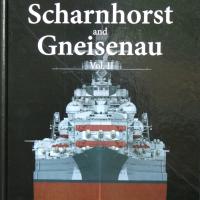 Volume 2 of the WW2 German Kriegsmarine battleships Scharnhorst and Gneisenau focuses on the career and appearance of DKM Gneisenau. Volume I gives more info on Gneisenau than anything previous – an extensive narrative history along with many B&W photos, a section of high-quality, large-scale photographs, stunning 3D graphic “visualizations” of her various fits, two large foldout sheets of 1/200 line drawings (four sides), a foldout sheet in 1/72 scale for the floatplanes and 3D glasses for the 3D photos. A modeler and historian could not ask for better references.

Kagero Publishing, from Poland, is one of the major military history publishing houses. Since 1998, when Kagero started publishing in English, over 550 titles have been produced. Topics focus on individual planes, armor and ships, along with a bevy of focused topics, such as a class of warships or an armor type. The authors are well-known for their accurate and impressive 3D graphic images (Visualizations) of warships, bringing realistic estimates of their colors and appearances to an otherwise black & white world.

Nazi Germany’s Gneisenau was named after the WW1 Imperial German Navy armored cruiser Gneisenau, which together with her sister armored cruiser Scharnhorst, disrupted trade and sank British warships off the western South American Coast in 1914 before being sunk by British battlecruisers off the Falklands afterwards. The human Gneisenau was August Wilhelm Anton, Graf Neidhardt von Gneisenau, later Field Marshall (1760-1831). His claim to fame was modernizing the Prussian Army after its defeat to Napoleon in 1806, and then helped to orchestrate the Battle of Waterloo as Blucher’s Chief of Staff. He partnered with GJD von Scharnhorst, same as their warship namesakes. His strategy and tactics inspired Claus von Clausewitz’s On War classic treatise on modern warfare taught to this day in military academies.

MSRP is $69.95, a rather steep price for a book concerning a single warship, but the wealth of info, many modeling opportunities and constant intense interest in this ship makes this price a bargain. Everything you always wanted to know about the DKM Gneisenau but were not afraid to ask! The hardbound book is a thick (28 mm or 1 1/8 inch) with 340 pages in European A4 size (210 X 296 mm or about 8 ¼ by 11 5/8 inches) with a gloss front and rear cover.

Six Chapters cover: 1) Operational service of Gneisenau; 2) Markings and camouflage; 3) Photographs specifically of Gneisenau; 4) Six stereoscopic photos and 3D glasses to see them properly; 5) Many 3D Visualizations (CG) of Gneisenau in each of its fits; and 6) Scale drawings and 3D visualizations of fittings. The mountain of detail is almost overwhelming, but Vol. II ends up being the go-to reference for exact appearances of Gneisenau, including her role as a blockship in Gdynia (now in Poland) in 1945. The authors own and still find pieces in their native Poland of Gneisenau, from her last resting place. The Author’s Note at the beginning of the book lamented that they could not do justice to show more photographs to truly show what life was like on the Gneisenau, due to the publisher citing cost reasons.

Chapter 1 fills pages 7-36 with 51 photos, 4 maps, and several pages of Admiral Lutjen’s logbook from her time in Brest bombed by British aircraft. How and why the Gneisenau was constructed, her new “Atlantic” bow, her escapes in Norway, the Atlantic raids, and the English Channel run back to Germany, her fatal bombing during conversion to replace her 11in triple turrets with 15in twin turrets, and her being towed around eventually to Gydnia where she was sunk to block the harbor form use by the Russians illustrate her stunning victories and crushing defeat.

Chapter 2 (pages 37-58) details the appearances of Gneisenau, and all of her various camouflage and colored turret guises, which should end speculation on these topics. 46 Photos included some for Scharnhorst’s camouflage after Gneisenau was permanently out of action. The last four pages follow the fate of each individual Arado Ar196 floatplane, the majority of which were trashed by her own gunfire.

Chapter 3 is the actual Photograph Gallery, from page 59-128 with 134 B&W photos of her career. These will perk up any modeler building the Gneisenau. Most are excellent quality, but interestingly, the insides of the ship are not portrayed.

Chapter 4 (pages 129-131) have six fuzzy, red and blue photographs that do show a 3D effect with the accompanying glasses

Chapter 6 switches to B&W line drawings in with 3D graphics in color of different parts of Gneisenau from pages 218-339 (the rest of the book). Everything from the bridge structure to individual fittings (funnel, directors, turrets, hatches, windows, portholes, cranes, grates, ventilation covers, liferafts, boats, posts, lockers, catapult, and floatplanes) is depicted in different scales.

The two large foldout B&W line drawings in 1/200 scale are perfect for the new 1/200 scale models of Scharnhorst and Gneisenau, and also for other scales. They are a major feature of this book, as are the 1/72 foldout line drawings for the Arado Ar-196 aircraft versions in 1/72 scale. Heinkel He-60 floatplanes carried from 1934-1939 are not illustrated.

I have not seen Volume I reviewed on the IPMS Review website so I can only assume that Vol. I mostly concerns Scharnhorst. Volume II is focused on the Gneisenau. The amount of overlap is not known at present, but Vol. II is very specific about what happened to the Gneisenau and not focused on the Scharnhorst. Early in WW2, these two ships were inseparable, and nicknamed Salmon and Gluckstein by the Brits. Of course, they participated together for over two years in several campaigns, and although focused on Gneisenau, you also know what happened to Scharnhorst when they operated together.

Volume II, although pricey, is an ultimate reference for knowing about and modeling the German battlecruiser Gneisenau. The differences between Scharnhorst and Gneisenau were minor, but distinct, which makes this Volume useful. It is an impressive tour de force of research and thoroughly covers accurate appearances of wartime Gneisenau and all its external details in photos and 3D graphics. Some coverage of Gneisenau’s proposed appearance after receiving 15 inch main turrets would have made this book close to perfection. Very highly recommended for German WW2 naval enthusiasts, battleship (battlecruiser) geeks, and to accurize any of the Gneisenau models available, especially in 1/200 scale.