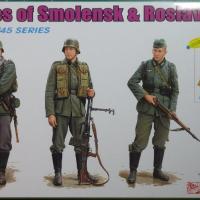 This kit features three figures depicting Wehrmacht soldiers fighting in the battles around Smolensk and Roslavl in 1941. From the start of Operation Barbarossa, the invasion of the Soviet Union, the German forces army had enjoyed many quick successes and had advanced over 300 miles in less than 3 weeks. However, when they encountered the Soviets in the region around Smolensk, the Germans ran into heavier than expected resistance and were delayed for three months from July to September 1941. Although, the Soviet counterattack failed, and resulted in huge losses, including three Soviet armies, this defensive battle slowed the German advance and showed that a Blitzkrieg to capture Moscow was not going to be as easy as expected.

The three figures and their equipment are molded in light grey styrene, with 3 sprues for equipment and weapons, and a single sprue for the figures. This kit also includes a small sprue of bonus accessories made of DS material, more about that later.

Each figure is comprised of six pieces, with the legs, arms, head and torso all being separate. Each figure is intended to be modeled in a generic, standing position, and each is armed with a different weapon. One is armed with a MP-40, another is with a MG-30(t), and the third is armed with a Mauser. Each figure comes with the same standard equipment consisting of a bread bag, shovel, gas mask, knife, headgear, and canteen. One figure has a German stick grenade tucked into his boot, and another carries extra ammunition in a bandolier. All of the equipment is molded separately from the body, which allows the modeler to add as much equipment as they prefer, while creating a nicer level of depth to the items when compared to having the equipment molded directly on the figure’s body.

The molds are nicely done; however, each piece has some flash which will require some clean up. Construction was simple and each figure comes with a separately detailed head and face to create distinct differences. Molding the equipment separate from the body allows the modeler to paint the equipment separately from the figure while still attached to the sprue, if desired.

Construction and painting instructions for the figures are detailed on the back of the box. Color callouts are not provided for all of the equipment, so additional internet searches will be necessary to get the details correct. The color references are with Gunze and Model Master paints.

The equipment and weapons sprues contain a real variety of items. Be sure to pay close attention to which weapons you use with these figures, because there are a number of firearms available on the sprues that weren’t being used by the Wehrmacht in 1941. Still these figures are generic enough that they can be used for German soldiers at really any point in the war, not just the early portion of Operation Barbarossa.

The DS material sprue contains 5 additional pieces of equipment, including four overcoats and tunics, and one pair of boots. The DS material is somewhat rubber-like, and not as firm as the standard styrene plastic sprue material. This means the items provided would probably be best used as part of a diorama to display extra clothing in a scene.

If you’re looking for figures for your next diorama, this set makes a great addition and is recommended.

Thanks to DragonUSA, and IPMS/USA for the review kit.