The Battle of Znaim. Napoleon, the Hapsburgs and the End of the War of 1809. 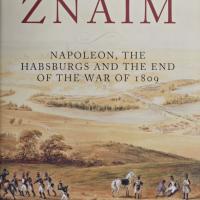 John H. Gill is currently a Professor at the National Defense University, and an Associate Professor at the Near East-South Asia Center for Strategic Studies in Washington, D.C. Jack is a retired Colonel with over 27 years of service, including the Liaison Officer to the Pakistani Army, and has worked on South Asia affairs such as the Kargill Crisis in 1999, Military Advisor to Ambassador James Dobbins, and US Envoy to Afghan Opposition forces. He has held positions with the US Joint Staff, US Pacific Command and more. Pertinent to this book, Jack is an acknowledged military historian and expert on the Napoleonic Era.

A 9.25 X 6 inch hardcover book 1.7 inches thick with 12/15.2 font written in British English (not American English). The front jacket cover depicts a painting of the Battle of Znaim, and the rear cover, a painting of another portion of the battle. There are 12 pages of 61 color and B&W illustrations of the characters, uniforms, and battle scenes with a few photos of modern-day buildings still standing in the center of the book. There are five charts and 22 maps of the troop positions and battles interspersed throughout the text. You get seven Chapters and an Intermezzo (other theatres of war for perspective). An Epilogue, Notes, and an extensive number of Appendices, and finally, the Bibliography, Index and Gazetteer (listing what places were on which maps, in case you were wondering).

If you are a fan of the Napoleonic Era, or wanted to learn more, this book is for you.

This book is a massive undertaking, and an extremely in-depth treatise centered on the Battle of Znaim, a small Austrian village on the Thaya River, a tributary of the Danube, strategically located for defense of Vienna, the Austrian capital. Just as interesting as the end-game (for the time being) Battle of Znaim are the precursor battles, especially the Battle of Wagram, which is described as apocalyptic. Not kidding.

I did not read the entire book due to time constraints, but one day I will. Scanned it, stopping here and there to read pages. The prose is lively, not dull or dreary, which makes this book a page-turner. Yes, that is right! You the reader gets the inside story on what these decision makers were thinking, with plenty of context to understand their reasons, and their personal foibles, which so often influenced the course of war. The unknown nature of these battles keeps you riveted during the chapters on the conduct of these battles. Thus, the oddity of Znaim becomes alluring.

The battles were bloody, and always in doubt until some defining moment. You learn about how politics incited these battles, and how negotiations were in the best interest of everyone at the end of battles. But there is a happy ending to this story. Napoleon meets his soon-to-be wife, Marie Louise, which helped to keep the peace but also started a dynasty (at least for the moment).

The place of these messy and bloody battles in history is important and sets the stage for encounters most of us are more familiar with, such as the invasion of Russia, and eventually, Waterloo. But these particular battles brought an end to the long-time rule of the Habsburgs, forever changing the politics and maps of Europe, even to this day. You’ll know why after reading this book.

This book is not a trifle – it is engrossing and sucks you into its vortex of addictive “need to read it” in one sitting. You feel like royalty getting inside the heads of the protagonists/antagonists, but the soldiers and lower officers are not forgotten. Very highly recommended for Napoleon buffs, strategic thinkers, mixers of politics with military actions, and the sheer scope.