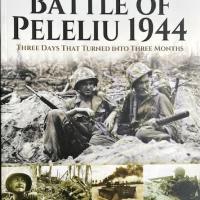 Jim Moran has been a student of the history on the United States Marine Corps, amassing a huge collection over the past forty years. He has assisted Hollywood productions on uniform and equipment details for Flags of Our Fathers, The Pacific (HBO miniseries) and Windtalkers. Jim is as associate member of the Second Marine Division Association, UDS Marine Raider Association, Marine Corps Association and the US Marine Corps League as well as being the “on-board” historian to the US Marine League.

The book is a paper back, has 241 pages, and has great photos and maps of the areas of the campaign.

The book is divided into eight chapters:

At the beginning of the chapters there is a brief description of a portion of the battle. The rest of each chapter is photos of events described earlier. The book contains black and white photos and maps. All the pictures are high definition and printed on a glossy paper.

The battle of Peleliu was supposed to take three days, instead it took 3 months to finally secure the island costing the lives of 1544 US Marines. The last survivor of the Japanese forces was a Korean laborer who gave himself up in 1954.

One of the last sections in the book has pictures of paintings done by Tom Lea, Time Life magazine correspondent and war artist.

At the end of the book there is a tribute to the 8 servicemen that earned the Medal of Honor during the battle, six of whom threw themselves on Japanese hand grenades to protect the lives of other personnel around them.

For me this book was interesting and gave me a better understanding of the events of World War 2. I want to thank Pen and Sword publishing, and IPMS/USA for the opportunity to read and review the book.