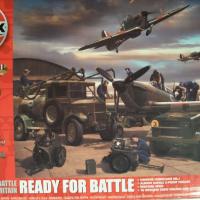 Airfix continues to impress everybody with the increasingly detailed and high quality of their products. This is a great gift set that can be made and used in a very detailed diorama of a typical RAF World War 2 airfield during the period of the battle of Britain.

The kits are all bagged individually which helps with assembly; the sprues are well molded with no flash.

The detail is very fine and crisp. The panel lines on the Hurricane are all very well defined. The instruction booklet is divided up into each model for ease of building. The only thing that disappointed me was the fact that the markings are limited to just one aircraft type, and the kit would have benefited from a few options on the markings. There are a few optional assembly decisions to make during the build of each of the kits included in the gift set.

First, based on the order in the Instruction booklet, is the Hawker Hurricane Mk.1, which was the mainstay of the RAF before and during the Battle of Britain. As with the majority of aircraft models, the construction begins with the cockpit. The cockpit is extremely well detailed for a 1/48 kit. The only issue I found was that there are not seat belts molded on the seat and no decals for them either. The cockpit does include the seat belts so you will need to get some aftermarket ones.

Next is the wing assembly. I decided to have one of the gun bays open, so I cut the access panels out on one side, as you have the option for both bays open if you want. The gun bays are very well detailed and look very real once completed.

The next stage of assembly is the fuselage which is a very simple job.

The wing assembly to the fuselage was not as easy, and you need to be careful lining it up. I had a little filling to do once compete.

You next have the option to position the flaps as you want. Then the rudder and tail flaps can also be angled to give any configuration you want.

The undercarriage is next, which can be built raised or lowered. I chose lowered so I could set up the set as the airfield shown on the box art work.

Then I finished the painting and the decals were all installed.

Next for assembly is the Bedford MWD. The first thing you have to do is decide the configuration in which you would like to build the truck, as there are three main ones, and you can do variations on these as well. I went with the last one as the basis of my build. The Bedford is very well detailed and was a fun, quick build, and the only problem area was the buildup of the engine compartment, with which you have watch you step with to ensure it line up correctly.

Next was at the Albion 3-Point Fueller, which, like the Bedford, is a great little kit with lots of details and options. The Albion went together very quickly with only a couple of problem areas to watch for. One problem area is the gear stick hole which needed enlarging on my kit. Another is that the cabin has to be very carefully assembled to line up correctly. Also I found that part numbers A21 needed shortening to fit correctly. On my kit, I left off one of the main hose lines so I could instead use the rubber hose included in the kit.

Now you have to assemble the ground crew, which consists of 10 figures and one dog. These all build up very well and are very well detailed.

Lastly you build the Oil Bowser, Trolley Accumulator, and Ammunition Trolley. These are simple and easy to build.

This is an excellent gift set which was a joy to build. The finished kits look great together.

One thing I will say is to use your own paint, as those included were not the best quality.

Thanks go to Airfix for providing this kit to review, and IPMS USA for allowing me to review it for them.