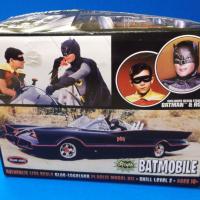 Wow! If packaging was what it was all about this would be the premier. Not only are all 6 sides emblazoned with super cool pictures, even the inside leaves of the bottom are covered in Crash, Boink, Biffs, and Pows!

Inside the box you'll find 3 black sprues, 2 clear sprues, a sprue of chrome plated parts, decals, instructions, and a pamphlet. The total parts count is 112 pieces for the vehicle and 6 parts for the dynamic duo. All are flash free and well molded. The tri-fold instruction sheet consists of a color guide, 9 assembly drawings, a decal guide, and a separate step at the end for the figures.

My daughter Grace and I started construction on this kit by removing most of the parts from the sprues and cleaning them all up. We followed the order of assembly in the manual and quickly had a completed chassis and interior. Being as the color of the day on this thing is black we sprayed the entire assembly flat black from an inexpensive hardware store spray can. Once that was done The engine and transmission was painted red brown, mainly because I was out of acrylic red, and installed into the chassis after the chrome parts were added. After that I installed the exhaust. This is where Dad messed up and proved the point that he doesn't always pay as close of attention as he should. I had hit all the joints on the chassis pieces with liquid glue and let them set. I then went to install the exhaust and realized I could not get the rear pipes over the axle. Doh! I just nipped off the locator tab on the mid pies and hollowed out the ends. Shhhh,,,,

Now it was time to work on the body. Everything went together tight and was attached with liquid glue even though it didn't need it. The clear parts were left off until after painting. The box top pictures appear to show at least the lower half of the body in flat black. That was promptly ignored and a cheapo can of Gloss Black enamel was employed for the finish.

During final assembly the windshield frames were painted as were the front turn signals. The body was mated to the chassis and the clear parts added.

Next were the decals. This by far was the most challenging part of the build. First off there are apparently some variations in the scheme. I surmised that by the fact that there were items that were almost duplicates of each other with different suffixes on the part number. There is no mention of this in the instructions and I have no idea what the differences were. I just picked the ones with the matching suffixes and went with it. That proved to be the easy part of this process. The body stripes were a nightmare. It took two nights to get them on and not a single one is straight or here it should be. If this was not a review kit I would have tossed the stripes and painted them. It was an extremely frustration process.

But we're not done yet. The figures are really well done. I painted them with various Polly S paints and installed them in the car. They truly are the finishing touch in this kit. Adding them totally transformed the look.

Well this review has taken a lot longer than it should have for various reasons. I learned a lot of things about modelling with my kids. Mainly that just because I think it's cool doesn't mean they do. My daughter is a huge super hero fan and was initially really excited about this kit. As we worked on it she lost interest. Not because of the subject but because of the era. You see, this isn't the Batman of her generation. This is Dad's old geeky Batman. The one with the goofy TV show. Not the cool modern post Justice League Batman. The only thing I have to that is POW!

This really is a great kit. It's snap together roots are readily apparent but don't let that scare you off. The detail is pretty good overall and everything fits well. There were a couple of oddities. One being the taillight lenses that go behind the solid opaque covers, the other being those frustrating decals. Run out and buy one then toss out the tail light lenses and paint the stripes. That's my recommendation.

A big thank you to Round 2 for this review sample. It is an enjoyable and highly recommended kit.