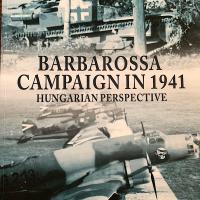 As an avid reader and collector of WWII related books, I am always on the lookout for material that presents unique perspectives and experiences from this era. Finding this book, Barbarossa Campaign in 1941 Hungarian Perspective fits right in.

Author Peter Mujzer is a devoted historian who has served in the Hungarian armed services and is a consummate student of its history. Prior to this book, he has published 10 additional works, specifically on the Hungarian armor, equipment, and battles of WWII. For this book Mujzer states, “…I would like to introduce our readers to the first major campaign of the Royal Hungarian Army fought against the Red Army in Ukraine from July until November of 1941.” It only takes a cursory flip through the pages to realize what an expert like Mujzer calls an introduction, is way more than that to the average reader.

After writing so many books on the subject you can bet that Mujzer has been good at sourcing material. This is quite obvious when you look at his selection of photographs for this book. Mujzer mentions that much of the photos he chose for the book come from a Hungarian online resource called Hungarian Fortepan. Although it’s likely that any Hungarian pictures from the WWII era would be novel to us, Mujzer states that he specifically sought previously unpublished photographs that covered 1941. The original sources of these images are from the rare servicemen who could afford a camera at the time as well as official Hungarian war correspondents. The quality of the pictures he chose is excellent. The photographs are a nice  mix of staged or posed photos balanced by a selection of understated, candid photos showing just what the servicemen saw and experienced.

Unlike the primary or major actors in the war, Hungary entered the conflict with less technological advancement and fewer trained servicemen. This becomes clear when you flip through the book and glance at the pictures.  What you see is the perpetual use of horses, the regular commandeering of civilian vehicles, and a devoted use of the bicycle. Like the Finnish, they learned how to make the best of what they had.

Mujzer opens the book with a well written, concise summary of the Hungarian Army’s current condition at the dawn of 1941. Included in this is what I might jokingly refer to as a modeler’s shopping list. In a few pages of text, Mujzer lays out a fairly complete list of armament (small and large), artillery, tractors, armored vehicles and motorized vehicles (domestic, foreign and captured).  The only way it could have been more complete would have been to include the specific horse breeds of the horses you often see moving men and supplies. My only wish would have been for him to have included a few comparable words summarizing the aircraft and their support vehicles used during the Barbarossa campaign. But to be fair, he has written extensively on just that subject in several other books. To give the reader an introduction to what the Hungarians were up against he also gives a four-page summary of what divisions and regiments made up the opposing Soviet forces.

Much of the writing in this book is about specific troop movements, subsequent engagements and the battles of the Carpathian Operational Group and the Mobile Corps. The format of the book is mostly sections of text explaining this accompanied by pictures that make up 60 to 70 percent of each physical page. The text is not an explicit description of the pictures but rather the pictures are there as support to help the reader visualize the events.

My individual preference is in personal historical accounts, so I enjoyed the times Mujzer deviated from his primary style of divulging events and activities. For me, the most notable and memorable stories in this book were, 1, the bit of commentary of how Hungary may have been coerced into the war and, 2, the brief personal account coming from a German war correspondent observing the Hungarian military at work.

The book concludes with some additional support material. There are thirteen small maps showing major battle offensives, three pages showing camouflage schemes on armored vehicles, and one page showing a single paint scheme for each of a He 111 and a CR 42.

Although the historical record of a smaller country’s involvement in WWII may be out there in many diverse sources, it often takes someone like Mujzer to make this readily accessible to new readers of this topic. Overall, I was very impressed with Mr. Mujzer’s efforts. His interest and passion for sharing it shows in the quality of book he assembled. I will be looking forward to reading more of his work and I highly recommend this book to anyone interested in the Hungarian efforts of the war.

Thank you to Casemate Publishers and IPMS/USA for providing this book for review.