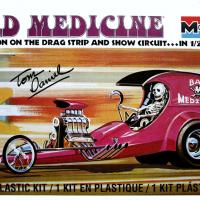 The Bad Medicine Model was created in 1970, designed by the infamous designer Tom Daniel. With over 85 designs to his credit, this one doesn’t disappoint. It’s based off of an old delivery truck c-cab with a skeleton at the wheel.

Upon opening the box, one will find a one-piece body molded in purple, a leather-look fitted seat/casket for the driver, two soft wheels for the front and the two rear wheels molded, in two pieces each, from black plastic. The parts found on the sprues were molded in white, purple, and chrome-plated. A nice touch is that the rear wheels are flat on the running surface and the rubber on the sides appears to have the pull marks that a true drag car’s tires would look at high speeds. Parts were individually packaged to prevent damage in transport.

I spent a little time cleaning up the excess flash on parts that were specifically molded in purple; the other sprues were good and for the most part ready to go. The engine went together with no problems until I reached the heads. There was one notch between the engine and the head that preventrf it from seating correctly. I filed the notch down on the offending side in no time and proceeded to the next step.

The three-piece body and legs on the skeleton fit together nicely and is quite realistic looking. The skeleton went into the seat beautifully and the seat is skillfully molded to look like tufted leather. The guide slots provided assure that the seat will fall into position just right. I did have problems keeping the steering column in the right position while also trying to put in the engine with the drive shaft on the same step. In hindsight, I think I would leave the engine and the bottom of the model until the steering column has time to dry completely.

The chrome-plated pieces looked perfect and went on smoothly until I discovered that one of the radius rods was short. I thought I must have broken it off somehow until I saw the end that was short had been chromed. After some debate, I glued it into position as if it were meeting the appropriate connection point provided. The addition of the accents, such as the steer skull and skull and crossbones on the back went on without incident.

I stuck to the recommended paint colors, for the most part. I changed the engine color from yellow to red-orange and chose to do the skeleton/ bones in ivory with an acrylic burnt sienna wash for realism. The decals were well made, thin, and stuck well. I would recommend putting the side flame decals on prior to putting on the brake lever, as there is very little room to maneuver the decal into place otherwise.

This is a stylish model that screams for a fun paint scheme. Be patient with some of the fit issues as, in the end, it looks like it could be a part of any drag race. I can recommend this model for 10 and up.

I’d like to express my thanks to Revell for providing the kit and to IPMS/USA for allowing me to review it.