Back To The Future III Time Machine 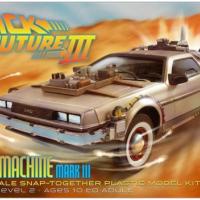 The “Back to the Future” (BTTF) movie franchise began in 1985 with the release of the first movie. The film series featured the adventures of Marty McFly as he traveled back and forth in time in a Time Machine built by wacky scientist Emmitt “Doc” Brown. That first plutonium-powered Time Machine creation had been built by Brown from a vintage DeLorean sports car. For the second movie, “Back To The Future Part II”, the DeLorean had been converted to a flying Time Machine. At the end of the second movie, just as order had been restored to the 1985 timeline (once again?), the Time Machine was struck by lightning which fried the time circuits and sent Doc Brown whirling back to 1885. A third iteration of the movie franchise was needed to rebuild the Time Machine using 1950s technology (is anyone else confused?) and to set the timeline straight one last time.

Polar Lights has reproduced all the movie versions of Doc Brown’s Time Machine in superbly engineered, 1/25th scale snap-together model kits, including the 1950s vintage Time Machine from “Back To The Future Part III” (BTTFIII), described below.

I would like to thank Polar Lights for developing and releasing these great, super-detailed but easy-to-build kits and Round2 Models for providing the sample of the BTTFIII Time Machine for this review.

When you open the colorful & sturdy box you will find six sealed bags containing about 60 parts, molded in gray, on several sprues including clear windows and rubber tires. Most of the parts are common to all four Time Machine variants but a few parts are unique to the first two variants from the first movie so there are few parts that will not be used. Also included in the box is a very nicely done foldout of pictorial instructions, a decal sheet with the two license plates from the series and a sheet of peel-and-stick license plates. As with most new Round2/Polar Lights/AMT/MPC kits, the box art contains several color photos and detailed descriptions of the kit features on the box top, bottom and sides. The box presentation grabs your attention and draws you in to see what the kit is all about

Right up front, it should be noted that most of the parts of this kit have a generous coating of mold release agent so prior to painting or assembly, the parts should be washed with warm soapy water and allowed to dry. Once the parts are clean there should be no difficulty getting the paint to adhere to the plastic.

For those of you that might not remember, the time machine was based on a DeLorean sports car from the mid to late 1970’s. The DeLorean was famous for its unpainted, stainless steel body. Polar Lights really outdid themselves with the finish on the body of these BTTF kits. The kit body’s finish very much looks like stainless steel. You have to be a little careful though because the finish can be rubbed off. I wore a small spot off the roof as I had the body upside down on my bench, while trying to install the chassis. On a real DeLorean you could buff out nicks and small abrasions with steel wool – don’t try that here.

The assembly instructions are provided in a pictorial form, have plenty of detail for younger modelers to understand and are arranged in a logical sequence that really should be followed to make sure everything goes together right. Particularly, the hoses and engine details on the rear engine deck need to be added after the cockpit is installed in the body. HINT: it will be helpful to test fit the parts that have tabs that fit into slots such as the ‘field coil’ runs that wrap around the body, the “Mr. Fusion” fuel cell and those big exhaust ducts on the engine deck, before they are installed in the body. This will make sure the tabs and slots mate properly as you are completing the final assembly, after the cockpit has been installed. Another helpful hunt is to fully insert the tabs on one side then gently push inward on the opposite tabs, with a finger nail or small tool, as you try to push them down into the slot. There are tabs on the cockpit and chassis that fit into slots in the body – just something else to keep in mind as you build.

There was just a little flash on a few of the parts but there were several “stumps” left over from the molding process (see photos) that need to be removed from door panels and the chassis so the assembled parts fit together correctly.

For the “Back to the Future III” version of the Time Machine, adapters were provided that snap into the wheel wells to hold wheels and tires in position, as they would appear was 1950s vintage tires and wheels. You need to follow the instructions closely because the adapters are made to fit correctly in specific wheel wells. Also, you may need to expand the openings for the wheel adapters with a #11 blade to make sure the adapters snap in properly. According to the instructions, you have the option to use either the adapters or the metal axles; however, the holes in the wheels are very slightly too big for the axles so the wheels do not stay on the axles very well. The detail on the white wall tires is very well done and there is no residual flash or other leftovers from the molding process on the tires.

The other significant difference between this kit and the other variants of the “Back to the Future” Time Machines is the pallet of 1950s vintage electronic circuits attached to the trunk lid of the car (remember, and the DeLorean was a rear engine car in the trunk was in the front). There are only four parts that make up these circuits and the completed assembly attaches to the trunk lid using double-sided tape. Small strips of double-sided tape were provided with the kit. I think Polar Lights did a great job in planning to keep these as no-glue-needed kits. The double-sided tape strips are very thin and younger fingers may need some help separating the paper backing but the result is that it looks like the time circuit pallet is truly strapped to the trunk lid with leather belts.

Since this is such a well-designed, snap together kit, all the detail parts can be painted prior to assembly without the need to scrape the paint from mating surfaces for assembly. For fine details such as the wiring on the dashboard and body and the brass bells on the alarm clock on the dash, I used fine-tipped, metallic enamel pens that I found at a local craft store. I also used fine-tipped permanent markers for highlights on the dash and red stitching in the seats.

In the first “Back to the Future” movie, the original Time Machine had a personalized California license plate from 1985 that read “OUTATIME” but throughout the remainder of the series the Time Machine had a futuristic barcoded license plate. This kit includes two versions of each of those license plates - one in the form of waterslide decals and the other in the form of self-adhesive stickers. Both the decals and the stickers are printed in very fine detail and allow the builder to add their personal touch to the finish of the kit. The self-adhesive sticker takes less effort to apply and is much thicker than the decal which makes it appear more realistic.

The “Back to the Future III” time machine offered by Round2/Polar Lights is a very well designed, snap-together model kit that is great for modelers of all ages. This kit is relatively easy to put together, paint and finish and a fun build, particularly for fans of the “Back to the Future” movies. This is one of those kits that would be great for getting people of all ages interested in modeling because you can put in any level of detail you are comfortable with and still end up with great-looking model. I would recommend the Round2/Polar Lights, “Back to the Future III” time machine for movie fans or anyone interested in building models.

Thanks again to Round2/Polar Lights for providing the sample for review and thanks also to IPMS USA for giving me the opportunity to review it.