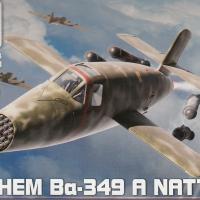 The Bachem Ba 349 “Natter” was another of those last-ditch attempts by the Axis powers to stave off defeat. The Japanese had the MXY7 “Okha” which was supposed to stop the US fleets off Japan. The Natter was supposed to shoot down the fleets of bombers which were reducing the cities of the Reich to rubble on a daily basis.

The concept here was an aircraft which needed no airfield, but was launched vertically using rockets to get the aircraft to altitude. There was a pilot, but his job was to aim the rockets contained in the nose at the bombers, and pull the trigger. An autopilot was supposed to guide the Natter from take off to the intercept area. After the rockets were fired, the Natter was supposed to descend to lower altitude, where the “pilot” would jettison the canopy. This would cause the Natter to split into forward and rear sections. The rear section was reusable, and should descend with a parachute. The pilot also had a parachute. The rear end would be recovered, a new front end installed, and it would be ready for another mission.

The reality was that there was only one manned flight of the Natter. As the plane left the launch tower, the canopy separated, probably due to a bad latch. The separation also removed the pilot’s head rest, which either caused the pilot to hit his head against the rear bulkhead, knocking him unconscious, or it broke his neck. Either way, the Natter failed to climb, and flew into the ground,

This is a double kit, containing two of everything in two plastic zip lock bags. The decal sheet has enough markings for two aircraft. Only one set of instructions, but that’s enough.

All of the parts are injected plastic, no resin, no PE. If you’re really into detailing in this scale, there’s a PE detail set for this kit. Brengun also has announced a brass launch tower for the Natter.

There’s also another double kit of the Natter, apparently using the same sprues. It appears to be the unmanned prototypes.

Assembly begins with the painting and installation of the cockpit interior and rocket motor in the right fuselage half. It hasn’t been that long ago that a cockpit was indicated by painting the top of the fuselage under the canopy black. Now we get a seat, an instrument panel, a floor and a rear bulkhead. The instrument panel has recesses to indicate instruments. There are no pins or recesses to help with alignment of the cockpit parts, so I had to do some cutting and sanding to the bulkhead to get the fuselage halves to mate cleanly. There are also no alignment helps for the fuselage, except for the vertical stabilizers which hold the fuselage rear in place.

The wings are glued to two “wing shaped” flat spots on the fuselage sides. The horizontal stabilizer has two holes in the center, top and bottom for alignment, but the parts it attaches to have no pins. The good old Mark 1 eyeball is the tool you need to get these parts aligned. On a more positive note, all of the plastic parts held together very nicely with an application of Tenax.

The wooden cradle for the aircraft went together pretty well. I glued the two end pieces to one of the braces, then when that had set up, finished the other three braces. Once I had the end pieces stabilized, it was fairly easy to get the other three aligned.

The paint schemes are labeled “April 1945” on the box back. I chose the one with RLM 76 overall with RLM 75 spots. The rocket motors were painted RLM 02 with dark brown rocket supports. I used Testors sand for the wooden cradle.

One trick I used for painting this plane was to put a small piece of sponge, called a “Cosmetic Wedge” inside the cockpit to keep the paint out. The wedges can be cut to size to use on just about any opening in models 1/48 and smaller. The soft sponge doesn’t damage the interior, and it expands to fill the opening, making it a very useful masking tool.

I only used one decal on my Natter, the warning stripe on the fuselage just behind the wing. There are no decals provided for Luftwaffe crosses, swastikas, aircraft numbers or personal markings. I did a quick bit of research in Osprey’s book “Downfall 1945” by Steve Zaloga. In April of 1945 the US Army and the Soviet Army were meeting at the Elbe River. There were a few pockets of resistance by some Wehrmacht units, but the Third Reich was very near collapse. There weren’t any operational Natters. The examples Brengun used for these kits were probably sitting in the factory waiting for finishing. This probably also explains the lack of nose cones for both natters.

After the decal, I put on the rockets and installed the canopy. The sprue connects to the front edge of the canopy, and extreme care must be taken to get the canopy to fit right. Only took me about an hour to get that tiny thing to align.

Highly Recommended. This is a tiny kit, but it’s really well done. The interior is splendid, and the kit goes together pretty well. I will probably do the other Natter as a “Luftwaffe ‘46” build, with the nose cone installed and “operational” markings for missions which never happened.

Many thanks to Brengun for this excellent kit, and to IPMS/USA for the chance to build it.