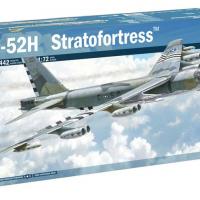 In 2020, Italeri re-released their big 1/72nd scale B-52H Stratofortress as kit number 1442. This kit is a re-box of the B-52H kit #1262 from 2006 with new decals representing three different aircraft from around the 1979 - 1981 time frame. In 1980, Strategic Air Command (SAC) was still in charge of the nuclear bomber and ballistic missile forces, the B-52Hs had only been in service for 20 years and Boeing’s AGM-86 Air Launched Cruise Missiles (ALCM) were into full rate production. This new-old kit brings markings for three new versions of the B-52H for modeler’s that can’t get enough of this great old bird.

A sincere thank you to Italeri for re-issuing this kit in tribute to the mightiest and most recognized (most feared in many places) of military aircraft.

As you dive into the sturdy box, you will find a lot of plastic - this is a big kit. When finished, this aircraft is going to be about 28” long with a 31” wingspan and will be around 7” tall. The fuselage comes in quarters – left and right halves of front and back halves and each wing is in halves as are engine struts, engine pods, external fuel tanks, horizontal stabilizers, two external missile pylons and each of the 12 cruise missiles. Landing gear can be built extended or retracted. Sadly, gone are the days when there were separate flaps, spoilers and weapon bay doors that could be positioned opened/extended or closed.

The box also contains the 7 ¾” x 13” (folded) instruction brochure that opens into five segments printed front and back. Most of the instructions are in black and white but the external painting guides for each version are in color. The assembly instructions are the same as for previous versions of this kit – relatively simplistic – but this is a pretty simple kit albeit big.

With this kit, there is also a brilliant new, large decal sheet by Cartograph. This 9” x 14¼” sheet includes the markings common to all B-52H’s plus markings for three specific aircraft - versions A & B as they appeared in the 1981 Bombing Competition (Bomb Comp) at RAF Marham in Great Britain and a 3rd aircraft from Ellsworth AFB, South Dakota.

The first thing to do is to separate the wing and fuselage parts from the sprues and clean up other parts in preparation for major assemblies. There are a few leftovers from the molding process on some of the parts (bottoms of the engine pods) and rough edges on the bigger parts. Be careful and use sharp tools to separate parts from sprues so chunks aren’t torn out while using side cutters (some of these sprues are huge and close to the part (e.g., on the wing halves)). As with previous versions of this kit, some parts are going to need to be trimmed during assembly (some significantly, like the forward looking infrared and TV turrets) to get the best fit.

For parts where there are no alignment pins or sockets, the instructions simply point out where parts join one another but they provide no other guidance as to how the parts fit together. For example, you have to pay attention to make sure engine nacelle cross sections match (top and bottom) with the rest of the pod. Also, there are [slightly] raised ridges inside the fuselage halves to guide the installation of the cockpit and wheel wells but there is no direction on whether those parts install above the ridges or below. The solution is to experiment until you get the best alignment and fit for the cockpit, wheel wells and fuselage halves, simultaneously. When installing the wheel wells, the slot in the wells where the four landing gear trusses fit (4 x part #31) are directly in line with the socket on the corresponding fuselage for the part #31 alignment pin, otherwise the landing gear trusses will not stand straight. When building the cockpit, there is a section of the left sidewall circuit breaker panel (part # 48) you can remove to expose the crew bunk. The panel has an outline of the area to be cut out on the back side and it has the word “REMOVE” molded into it. There is no reference to this in the instructions, but the bunk can’t really be seen after assembly anyway.

If you have built one or more of these kits in the past as I have (B-52Gs and/or the 2006 “H” kit), you will remember the not-so-great fit between major sections and using a lot of putty to fill gaps. The fit of those major sections, particularly the wings to the fuselage, seems to have improved with this kit. I also used a couple tricks that might have helped with alignment, but the overall outcome was that I used almost no putty on this build. When I joined the fuselage halves (step 3), I did not cement part #36 (wing mounting block/tabs) in place. That allowed for the manipulation of both wings on part #36 tabs, simultaneously, until the best fit with the fuselage, on both sides, was found (see photos). I could then glue the wings directly to the fuselage where they touched. Make sure the cement on the wing halves is completely cured before trying to attach them to the fuselage because the wing has to be opened up slightly to fit over the part #31 tabs. The engine struts and pods go together and attach to the wings without too much effort.

The cruise missile halves have pins and sockets on each end, and they are very slightly but noticeably out of alignment with each other. The easiest solution is to remove the pins and clamp the missile halves together after cementing for proper fit.

The curvature at the top of the missile pylons is close, compared to the real thing but it is not an exact fit to the mating surface of the wing. On a real B-52, there is a wing-to-pylon adapter (part of the wing) that is not represented in this kit.

The assembly instructions are the same as the previous version of Italeri’s B-52H but with this version, there has been a bit of a mix up with painting instructions. As stated above, this kit (#1442) is a re-issue of the 2006 kit (#1262) – same part count/same kit but for 3 different aircraft than previous kits (the difference is only in decals and exterior painting instructions). The issue for this kit is that the “Suggested Colors” and associated reference letter call-outs are different but the call-out references within the assembly steps are the same as previous kits. This results in most of the interior color call-outs during assembly referring to the wrong color. Crew seats should be gray and have red head/helmet cushions, olive green seat and back cushions and the control columns and all four sets of crew instrument panels should be flat black. In step 7, you would want the tires painted flat black vs. flat red as indicated. The exterior color call-outs accurately reflect the Single Integrated Operational Plan (SIOP) external production colors of the day.

As usual, the Cartograph decals are very clear, accurate, the right colors, sturdy and are generally easy to apply. Many are very small but are so clear they can be read with a magnifier. Because they are so clear, you can see that the instruction call out for external fuel tank cradle positions are swapped (decals # 45 and # 46 need to be swapped (#46 is the FWD cradle position mark and #45 is aft)). The engine instrument cluster in the middle of the instrument panel decal should have 4 rows of 8 gauges but only has 4 rows of 7 gauges (but you can’t see it anyway). The horizontal stabilizer trim angle decals are also very clear and easy to line up on the neutral position. An issue with the instructions is that there is no guidance for decal orientation, only for position on the external paint guide. It took about 15 minutes of manipulating to get decal #40 (red, forward looking sensor window maintenance instructions) into the correct orientation/position (fortunately, these are sturdy decals). The last item to note here is that B-52s have static pressure ports on both sides of the fuselage (decals #25 and #26) but only one set is provided. The end result still looks good though.1 - decals 1

When all the hard work is done, you have a great looking B-52H to display. The instructions and the box indicate the ‘skill level’ is for “adult modellers ages 14 and over” and I would certainly recommend this kit for modelers with more experience, but I’d also recommend this kit for less experienced modelers with the desire to build a replica of the best military aircraft ever produced. It is a little pricey and will take some extra work to clean things up and make ends meet but it is worth the effort.

Thanks again to Italeri for re-releasing this kit, to Model Rectifier Corporation (MRC) for providing this sample for review and to IPMS USA for giving me the opportunity to review it.