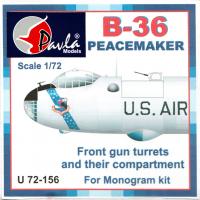 Pavla Models has been putting out a lot of nice sets for older kits. I really love this because I’m one of those people that are hooked on the model kits of my childhood. This time they did a conversion for the Monogram B-36 Peacemaker. Another interesting thing about Pavla is their choice of subjects for their conversions. They picked the 20mm cannons and compartment for the front top of the aircraft. Talk about different, every time you see a model of a B-36 they all look the same, but with this conversion you have the top bay open with guns retracted.

The B-36 was a strategic bomber built by Convair from 1949–1959 eventually being replaced by the B-52. It had 6 remote controlled retractable gun turrets as well as fixed tail and nose turrets giving it a total of 16 - 20mm guns surrounding the aircraft. This set models the twin turrets on the top front compartment. The turrets did cause a lot of vibration problems, causing electrical wiring to jar loose and vacuum tube electronics to malfunction, leading to failure of aircraft controls and navigation equipment. In 1954 the turrets were removed for the new “featherweight” design program reducing the crew from 15 to 9.

This set comes molded in the familiar grey resin. The mold is crisp and bubble free with a lot of detail. There is the gun compartment, 2 20mm cannons, all associated gear that was used to move them in and out, ammo belts and container, and the outer doors in the open position. There are 2 small sheets of instructions showing how the parts come together and what parts of the original kit to remove.

Putting this kit together is a little difficult because of how many delicate parts there are. Just remember to be careful when removing the mold blocks from the parts and also remember how delicate they can be. If one of them does break it can be easily repaired with a little super glue. After removal of the mold blocks I painted some of the parts before assembling them. The detail is nice and I used some black detail fluid to make it pop out. I painted the inside of the compartment zinc chromate green and the turrets silver with black cannons.

I highly recommend this kit if you want to update this older Monogram kit with some much needed and unusual detail. This set will make your model stand out from the rest. I can’t wait to see what is coming out next.

I would like to thank Pavla Models for this review kit and IPMS USA for the opportunity to review it.