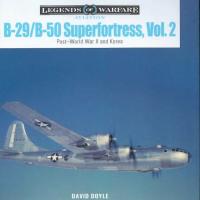 David Doyle's book on the B-29/B-50 Superfortress is one of the latest entries in the 'Legends of Warfare' series with entries in Ground, Naval, and Aviation. The is Volume 2 that follows David Doyle’s earlier work, B-29 Superfortress, Vol. 1: Boeing XB-29 through B-29B in World War II, that was released on April 20, 2020. The Legends of Warfare series has expanded rapidly since its 2017 debut in the market with now over 50 titles released. This hard cover series covers a wide variety of monographs at a good price point.

After many years of being published in enthusiast publications focused on military vehicle restorations, David Doyle 'graduated' to full-fledged books in 2003. His first book was a hefty 512 page history of US military vehicles. He has now had more than 100 books published in military vehicles, aviation and naval topics. David and his wife Denise have amassed a collection of ten Vietnam era military vehicles that still displays at shows. In June 2015, was honored with the Military Vehicle Preservation Association's Bart Vanderveen Award, given in recognition of "...the individual who has contributed the most to the historic preservation of military vehicles worldwide." Be sure to check out David's website at www.DavidDoyleBooks.com where you can see and buy at a discounted price off of MSRP, all his books that are still available.

The Boeing B-29 Superfortress is a four-engine propeller-driven heavy bomber designed by Boeing and flown primarily by the United States during World War II and the Korean War. Named in allusion to its predecessor, the B-17 Flying Fortress, the Superfortress was designed for high-altitude strategic bombing but also excelled in low-altitude night incendiary bombing and in dropping naval mines to blockade Japan. B-29s also dropped the atomic bombs on Hiroshima and Nagasaki and became the only aircraft that ever used nuclear weapons in combat. The B-29 program exceeded the cost of the Manhattan Project of $1.9 billion, being developed for only $3 billion and was the most expensive program of the war. Production ended on 28-May-1946 with 3,970 units built. The B-29 was used in the Korean War for daylight strategic bombing until the MiG-15 appeared. After the loss of 28 aircraft, the B-29 would be restricted to night time only. The B-50 Superfortress (originally B-29D) achieved its first flight on 25-June-1947. The production line was open until 1953 with 370 aircraft built. The B-50 was in service from 1948 through 1965 and replaced the troublesome Wright R-3350 Cylcones with the more powerful Pratt & Whitney R-4360 Wasp Major. A larger vertical tail and many other changes were made to distinguish the B-50, but the most important change was the change from B-29D to the B-50 to help justify its Congressional appropriations.

The front cover features a color photograph of a Boeing B-29A-30-BN Superfortress (sn 42-94106), probably on a long range mission in 1945 [an enlargement of a photo found on page 6]. The rear cover features a black and white photograph of the first of two atomic tests in Operation Crossroads on 01-July-1946. “Dave’s Dream”, a B-29-40-MO, had just dropped a Fat Man atomic bomb over Bikini Atoll. You get 128 glossy pages graced by clear, well captioned, photographs. I counted 221 photographs; 72 in color and 149 in black and white. Many of the selected photographs are being published for the first time.

David Doyle does a great job of covering the Superfortress after WWII through well-captioned photographs. Most chapters begin with about a page of text describing the Superfortress variant, followed by period photographs, many in color. You can see from the Chapter titles many of the variants that are discussed. This book is an easy read, with the majority of the text being in the photo captions.

One point that I was surprised at was that the Superfortress served in the US Navy. I was aware of one of these served as the mothership for the Douglas D-558-2 Skyrocket. I was surprised to learn that two of these aircraft would be re-designated P2B-2S and were used as anti-submarine aircraft. Another role that was interesting is shown on Page 117 (see attached page). Eighteen B-50Ds were modified for testing, being coded with the prefix ‘E’ to indicate they were exempt from compliance Technical Orders (except for Urgent Action Time Compliance TOs). Two of these EB-50Ds were converted to carrier director aircraft for use in the RASCAL (Bell XGAM-63) testing program. The first powered RASCAL would be launched form the EB-50D on 30-September-1952 at White Sands Missile Range. Bell’s RASCAL was intended to be the USAF’s first air-launched nuclear standoff weapon. The supersonic RASCAL became operational in 1957 with the B-47, but was cancelled in September 1958 in favor of the AGM-28 Hound Dog.