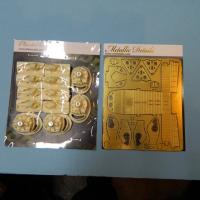 Product provided by: The reviewer while trolling the internet, and his wallet

Metallic details is a new company to me. Based in the Ukraine, I found them while searching for 1/48 engines for my Monogram/Revell (Now Revell) B-29 builds. They have a VERY comprehensive and growing catalog of items for armor, aircraft, cars, they are obviously growing!

When I received the package about two weeks after ordering (that’s REALLY good delivery time given today’s worldwide issues) I was impressed with the quality of what was provided, read on!

First in hand were the engines. These are not just resin copies of the kit items, but new and improved engines with finer detail around the valve pushrods, etc. They also incorporate deeper chin intake ducts, and an ignition tube assembly as noted on some later Wright R3350 engines. Details are very-well executed. On examination, it appears these items may have been 3D printed, as the engine cylinders had “layered” or “stepped” appearance (which disappeared on the first coat of paint). They fit perfectly into the kit cowlings.

Next: The turbocharger exhausts. These were also in resin, and incorporate the butterfly waste gates which are very prominent on the actual exhaust ports of the B-29. What is also included are the turbochargers themselves and the exhaust ductwork that comes from the engine. Detail was flawless, and very impressive, a great improvement over the 38-year old kit items.

The photoetch set was next. Under corrosion-preventative film, the brass includes the exhaust port cooling slots and also improved metalwork to accompany the exhaust ports. The main wheel wells (called “Cabins” on the instructions) are designed to be folded like a tin-toy, with tabs that fold over corners to hold everything in place and add structural integrity to the butt-joints.

I started with the engines. These essentially were paint and install items, and looked really good in the nacelle. The depth of the intakes means you have a more realistic intake. Take your time to align everything and you’ll be good. I have seen aftermarket companies just put a screen across the front. This was not the case on B-29’s, as the two oil coolers and other accessories were directly fed from the outside. If going for an AMS build I’d install oil coolers at the extreme right and left of the ducts, which would fix my desire. I was not AMS building this one. NO TIME! It was fine as it was for a desk model, which is where the kit has ended up in an office.

The turbochargers were next. I cut out and Dremel-tooled one inboard engine nacelle, and had a gaping hole on finish. No, I’m certain someone could do these, and I tried. When one nacelle didn’t work, I tried another. Nope. Was not going to happen. Up front, my sheet metal skills are not up to par, and I could not get the covers over the turbos. But I gave it the old college try. In the end, I cut off the exhausts just behind the butterfly valve, ground them to an appropriate angle for mounting on the kit’s exhaust ports, superglued them in place, and called it done. See the previous paragraph - office desk quality. But that does NOT judge the quality of the Metallic details parts; they were great, and the only problem was the builder, ME!

As to the wing that I had just destroyed, that was relegated to another stash B-29 kit destined to have the Paragon B-50 conversion installed. No loss, as the nacelles are coming off the wing for that one.

The main wheel wells were interesting; The Revell-Monogram Kit has a very shallow main gear well, and it is not representative of the real thing. The Metallic engineering was well thought out, and only requires you to be careful during folding, as a “mis-fold” and trying to correct will result in a failed joint due to work-hardening of the thin metal used. If you do this, just use some tape as a hinge and support, and use superglue.

Once everything is folded up, it looks really nice, and fits fine. You will need to do some thinning of the inboard nacelle interior. The main gear attachment uses the kit plastic mount point box from the back of the shallow main gear well, glued to the back wall of the Metallic detail well. This accepts the kit gear or (my recommendation) the replacement SAC metal landing gear. Just take your time to align everything and you’ll be ok. You will also have to build new gear extension lock braces, (the “V” braces that attach to the extension walking beam). They will be too short with a proper gear well, and should be attached to pivot points at the top of the wheel well at mid-point. You’ll see what I mean when you get there, it’s hard to describe and photograph.

I want to see what else comes out of Metallic Details shop in future. I tend to support aftermarket companies because they are run by people who are modelers themselves, and want them to succeed. That, and the fact they usually save me a bunch of scratch-building time!

This set gets full marks for utility and fit. Metallic Details are available on E-bay, or through their website. By the way, they appear to make a set of 1/48 B-29 flaps and 1/72 engine details just like this set. I’m contemplating them for later. Just type in B-29 engines on your search engine and they are there. Well done Metallic Details and we look forward to what you have next!

Photoetch for B29
Previous Next