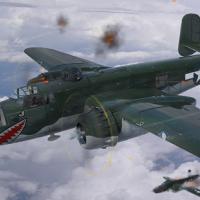 I’ve always liked to let the pictures tell the story, but in this case, they can’t show you what a spectacular fit everything is in this kit. I must give them an A+ for pre-planning and engineering here. Every piece just click fits into where it was supposed to without issue, with only one exception.

The fix for this was simple and took less than 3 minutes to fix. The wings mount to the fuselage with a “push, slide and click” affair that is great, except that the fit is so tight that I almost couldn’t get them apart again. All I did to affect the necessary repair was to remove a slight amount as shown in the images and it now becomes easy to install and remove for painting. This, incidentally, will allow separate finishes of wing and fuselage, making life easier still. Images show the forward nose compartments with some scratch building added, such as the bombardier’s seat and backing. Just an added touch on my part. Images show basically how easily all the interior compartments fit together and, when building in this size, that’s a major plus.

The engines are kits in themselves. I had built, wired and painted both before making the decision to change the engines to an earlier style. Why, you may ask? It is in my nature to come up with something different in order to not have a model that looks like everyone else’s, so I’ve long been looking for a natural metal scheme with invasion stripes. Sounds easy, right? Wrong ! I spent a long time finding a scheme that “melted my Hershey Bar”. The changes were to the top side of the cowlings when the individual exhausts were eliminated, along with the protruding “bumps” on the topside. All topside exhausts were placed into a collector ring that spilled into a dump tube as shown. As to the markings, once again, go-to guy Keith Davidson to the rescue…”Red Pegasus Decals” in Columbus, Ohio, created a large set of decals that I’ll hold in abeyance til the finished product, but I have run parts here as a teaser. If you are sufficiently teased, at this point, let’s move on.

I can tell you that at this point of construction, if you’re on the fence about purchasing one of these, I wouldn’t hesitate for an instant. This has to be one of the best, most enjoyable to build kits I’ve run across in a long time!

Stay tuned for the grand finale coming to a website near you soon!

Engine and Prop
Previous Next