B-25 Mitchell Units of the CBI 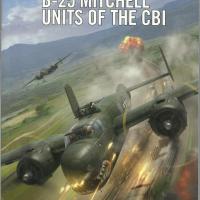 Osprey Publishing continues to expand its “Combat Aircraft” series, this time with an installment on the B-25 Mitchel Units in the CBI. Like all the other books in this series, you can expect lots of period pictures, color profiles highlighting markings and main camouflages with excellent and detailed research.

The book is broken down in chronological order, which sort of follows a geographical order as the priorities in the CBI front shifted between India, Burma, and China.

These are the chapters and subsections on the book:

As mentioned before the author has done an excellent job researching the topic. You don’t just read reports of missions, but the combat actions are described within the overall strategical and tactical situation of the front. The extensive B&W images support and enhance the narrative.

The Mitchells attached virtually any ground target you could imagine, but most of their missions were part of a war of interdiction against the Japanese army: Rail lines, rail bridges, shipping lines were the most common target. With the Japanese fighting a war so far from the homeland and having limited airplanes at hand, aerial guerrilla tactics were the most effective way to neutralize the enemy.

As the war evolved, tactics did too. From medium level concentrated bombing of targets, the B-25 moved to more low-level, ground-attack style of missions, for which the 75mm cannon of the –H version became a useful tool. They also locally modified standard bombs to have a “spike” that would impale them on the ground and destroy the rail lines, rather than seeing them bounce away and roll off the rail lines embankment.