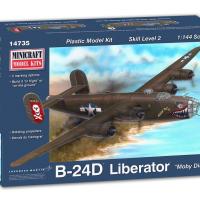 The B-24 was produced in greater quantities than any other aircraft in WWII. The B-24D was the early version of the B-24 having served in all theaters of operation. The United States Navy, United States Army Air Force, and many allied air forces units employed the B-24D worldwide.

This B-24 kit from Minicraft features a new 'D' fuselage and greenhouse nose with high quality Cartograf decals. The markings are for two 8th Air Force aircraft that served with the U.S. Army Air Corp.

When you open the box you'll find thirty-eight light gray plastic bits with fourteen clear plastic parts. You won't be using all of them but you can build the model either in-flight or on the ground. If you choose to do the in-flight version (blade-less spinners and retracted landing gear) you'll need to supply your own stand or you can get one from Minicraft for that express purpose.

The markings options are for either Screamin' MIMI of the 565th BS, 389th BG, Norfolk, UK. or Moby Dick of the 320th BS, 90th BG, South Pacific. The Cartograf decals include stars and bars as well as some seat beats and an instrument panel. More than adequate for this diminutive scale. One neat-o thing is that Minicraft, via Cartograf, provides both the white and yellow lettered versions of the nose art that was used by Screamin' MIMI. There are also decals for the aircraft's serial number as well as the specific fin flash for each.

This Minicraft B-24D is actually an old Crown mold that has been banging around for awhile. Minicraft Model released a “D” version not that long ago and this appears to be that same kit with new marking options. There are some fit and finish issues with some of the kit parts which may leave you wanting but the kit does have the proper shape and outline. The fuselage parts feature fine raised panel lines and some nicely molded bomb bay doors.

The lack of molded detail on the wings however may require the purist in you to add some detail here and there. In particular, to the super chargers and the engine faces. The super charges are mounted on the bottom side of the engine nacelles. So, maybe not so lacking after all. Aside from the raised panel lines on the wings, molded detail on the bottom of the wings is pretty much non-existent.

For some engine detail I added plasticine HO scale brake wheels with the center removed. It adds some relief and if you squint just right you'll swear it's a wiring harness. There exists a pronounced gap between the upper and lower wing halves but that gap can easily be remedied with some putty and a sanding stick. The gap is on the bottom so not as tragic as it sounds. All that's left to finish the wings is to attach the engine nacelles.

See Step One of the assembly instructions. And remember... measure once, cuss twice.

Some careful masking will be required before you paint the fuselage in order to show off the observation windows on the sides of the forward fuselage. There is no bombardier position detail provided for the nose section but in this diminutive scale (1/144) anything you might scratch build will be known only to you.

The remainder of assembly is pretty simple. There aren't that many parts to begin with and assembly not all that time consuming. One area that will require some of those crafty modeling skills is with the horizontal stabilizers. There are some pronounced ejector pin marks on those pieces that will need some attention. Nothing insurmountable. You should also add more than enough weight to the forward section of the model, otherwise a 'tail-sitter' is in your future.

Clear pieces are also provide for the gun turrets as well as a couple of machine guns for the bombardier station in the forward fuselage. There isn't any detail for these gun turrets/positions so you will need to fashion your own, should you choose. It should be noted that in this scale, a little bit of scratch building goes along way. For my B-24D I replaced the molded guns with some appropriately sized staples.

The markings are from Cartograf. The two marking options provided are for B-24's that did not carry leading edge de-icing boots. Which will save some time and effort when it comes to painting either Screamin' MIMI or Moby Dick. On Olive Drap over Gray aircraft the U.S. Army Air Corp experimented with bright green blotches on the leading edge of all the flying surfaces in order to break up the outline of the aircraft. But that green soon faded in the hot hot sun and wound up doing little to no good. As the be-bedraggled soothsayer said...”live and learn!”

Several prominent features of the B-24 are absent from this kit. Namely the horn-like pitot tubes either side of the forward fuselage and the tail skid. Of course, if you depict your B-24D in flight the absence of that retractable tail skid won't be a problem. A quick trip, to the spare parts box should provide the proper facsimile for the skid. The pitot tubes were fashion from the grab handle of a 1/35th scale Jerry can, with the aid of some judicious sanding.

After all of that, the only thing to do is paint this beast and apply the decals. The decals provided are pretty basic (stars and bars and nose/tail fin art) and will take little time to apply. On my example, they all went down nice and easy. The seat belt decals and instrument panel added a nice bit of detail to the cockpit that is otherwise lost.

Minicraft Models B-24D has the correct shape and stance of the real thing and makes a nice addition to any small scale collection. Not to mention that your display case will have plenty of room for more than one.

My thanks to Minicraft Models and IPMS/USA for this review copy.