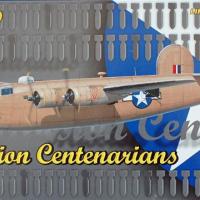 Editor's note: This build includes parts from Quickboost.net as noted below:

I would like to dedicate this model to SSGT M.G. Hobelman who served with the 376thHeavy Bombardment Group based in San Pancrazio Italy. SSGT Hobelman flew 38 combat missions from September 21, 1944 to April 15, 1945 manning the nose turret of a B24J. Thanks to his son, a good friend of mine, I had the pleasure of meeting SSGT Hobelman and sharing conversation over breakfast about what he experienced during the war. Unfortunately, “Hobie,” as he was affectionately known passed away last year. I thought often of the stories he told me during this build and will never encounter the B24 in the same way as a result. Rest in Peace my friend.

This is another limited edition offering in which Eduard takes an existing kit, in this case the Minicraft B-24 and adds those famous goodies they are known for. In addition to the kit, you get two photo etched frets, one of which is pre-colored, a sheet of canopy masks and a small clear film sheet for the waist gunner’s windows. Two decal sheets are included and form the basis for the kits theme. “Mission Centenarians,” means what it says. Eduard has provided markings for three aircraft that completed over 100 missions and then came home to assist in war bond tours. Option number four is “The Vulgar Virgin,” a B24 of the 98BG that was lost during Operation Tidal Wave, the bombing of the Ploesti oil refineries in Romania. The Minicraft kit has been around awhile and was made to allow several versions. It has a few issues that I’ll go into later but is generally a decent kit. In typical Eduard fashion, the instructions include color views and detailed histories of all the subject aircraft.

Construction starts with all the interior parts. You’ll have to muster a lot of patience because the volume of photo etched parts going into the fuselage takes a while. The cockpit, thanks to the pre-colored PE, results in a very detailed rendition of the pilot’s office. There are seat belts complete with release handles. I didn’t have a pair of tweezers small enough to hold them so you won’t find them on this model. The waist gunner positions get ammo boxes, intercom and oxygen regulators. The 50 cal. ammo links look real nice on the fret but when I tried to bend them into a configuration like the real thing, they folded up and in some cases, came apart. The Quick boost resin oxygen bottles were added at this point. You get 14 of both the large bottles and the smaller rescue supply bottles. These are well cast but you need references as the parts come with no painting or placement instructions. The large tanks were painted yellow and the small ones are green, both have silver retaining straps. Placement was a bit of a guess because I didn’t have any clear reference to locate them with. Sadly, most of this fine detail effort is lost when the fuselage halves are closed up. I found I had to remove the map case on the Captains side panel as it forced the seat inward and broke its mount. Eduard chose not to address any detail in the bomb bay. This is a weak spot in the Minicraft kit. The racks are chunky and the bombs look too small for the scale to my eye. As it turned out, I did not need any details. The fuselage halves are molded with the bomb bays open which leaves a thin rail of plastic along the bottom to glue together. These were warped on my example so I glued the bomb doors closed for strength and still ended up using putty to level it out. I couldn’t put enough weight in the nose to make right. I suspect the gear would not hold up for long under the amount of weight it would take. The upper wing halves get some photo etch detail in the gear wells that won’t fit once the halves are glued, so follow the directions. Another warning, check the fit of the wing tabs before you assemble everything. They require trimming and will break your fuselage joint trying to force them in. Lastly, check the fit of the nose glazing before you close the fuselage. I went to a lot of trouble tightly closing the nose section only to discover (too late) it needed a shim to match the width of the clear part.

As I referenced in the opening, in honor of SSGT Hobelman, I chose “The Blue Streak,” a B24D assigned to the 376 BG, 514 BS, based in San Pancrazio AB Italy c. 1944. This aircraft flew 110 combat missions before it came home for its war bond tour. As always, Eduard uses Gunze and Mr. Color references, neither of which I can get where I live. Luckily, the internet has several fine cross reference charts although I didn’t really need them. This B24D wore a standard Olive Drab FS34087 over Blue FS35414 both available in the Model Master range. I primed the airframe with Alclad II Grey Primer and Microfiller, a new product for me. It worked very well. Dries fast and sands to a smooth finish. A big Thank You to Eduard for the pre-cut masks that made to normally tedious process fast and easy. After pre-shading the panel lines, I airbrushed the Blue underside color first. This I followed, after masking, with the OD top color. Then it was time to clear coat for decals. Again I tried another new Alclad II product, Aqua Gloss. At first, things appeared to be going well but turned ugly as the product started to pebble on the surface! I don’t think this was the fault of the product. The directions are very clear about airbrush pressure and application. I don’t have a regulator on my old compressor and it was about 100 degrees when I was doing this. I suspect the product was drying before it could lay flat. At this point, I set it aside to fully dry then sanded very carefully with polishing cloths to a reasonable surface. Not wanting to tempt fate, I used Future to complete the clear coat. The decals are some of the best I’ve ever used. They came off the sheet almost instantly and laid right down into the surface details with nothing more than water. I sealed the decals in with clear gloss followed by clear flat to knock back the shine.

After peeling the masks away, I installed the guns, props and antennas. Landing gear assemblies include some nice photoetch torque links and tie down hooks. The landing gear bays also get some more photo etch rib details at this point. I had to cut some of them to get a good fit. Superchargers, courtesy of Quick boost were installed next. I thought they were warped when I saw them in the package but once the pour blocks were removed, they fit perfectly in the kit recesses. They are painted semi-gloss black. Some mild weathering and wear finished our war weary bird.

My overall rating for this kit is a nine out of ten. The discount is for the Minicraft kit. The bomb bay area would need a lot of work to really shine. There are also a few missing bulkheads that would have framed the details a bit better. High points for me are all the Eduard extras. The pre colored PE fret is a work of art. In particular the cockpit that it produces is amazing. I didn’t use all the PE parts as some are so tiny I didn’t have tweezers small enough to handle them! The clear part masking sheet is a huge time saver. As for the Quick boost parts, the oxygen bottles are nicely rendered but could use some kind of instructions. The superchargers are well done and an improvement over the kit part so mission accomplished there. As I said before, my only regret is most of the detail Eduard has given us is not visible once everything is buttoned up. This kit in the hands of a super detailer (with younger eyes) could be a real show stopper. Only experienced modelers should tackle this kit mainly because of the small PE parts and fit issues that need fixing. Thank You to Eduard and Quick Boost for providing the samples, and to IPMS for making it possible for me to share them with you.