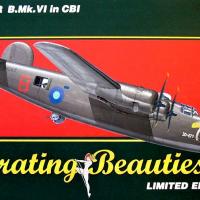 Although the B-24 Liberator shared the honors with the B-17 Flying Fortress of being the principal American heavy bomber of World War II, it was a much later design. It incorporated several unusual design features, including the Davis patent wing of very thin section and high aspect ratio, and bomb bay doors which rolled up like the top of a roll-top desk. This feature was created to make it more difficult for enemy fighters to know when the bomber was on its final bomb run. The doors moved up the side of the fuselage instead of hinging down as in the B-17. The B-24 had a range of 3,000 miles, together with a speed of more than 300 m.p.h. and a ceiling of 35,000 ft. The B-24Hs in RAF service were fitted with Boulton Paul tail turrets, but retained the rest of their standard armament.

The 12-page instructions are printed on gloss paper and consist of an introduction with history, a one-page parts layout, five pages of assembly detail, one mask placement guide, and 4 color aircraft marking and decal guide pages. In addition to the instructions, Edward provides access to their web site containing pictures of the model and box contents, listing 124 plastic parts, along with history for each of the included marking and decal options. Color charts only have Aqueous and Mr. Color numbers. There are no Federal Standard numbers provided. The decals, made by Cartograf of Italy, are in perfect register, thin, and opaque.

The two trees of clear parts are sealed in their own plastic bags and, especially the turrets, are thick and distorted. A total of six other plastic trees are cast in light gray with recessed panel lines. These trees come packaged in 3 sealed bags. Some of the sprues are labeled Minicraft from China, which are from their very well-detailed B-24 kits and have parts for alternate variants. Unfortunately, the molds are beginning to show their age.

There is some minor flash that needs to be removed and numerous sink holes that will need to be filled on the wings and fuselage. The sides of the engine nacelles needed a great deal of filling to close the gap between wing halves. The engine cowlings need a fair amount of cleaning up work, with sink marks on the outside and ejector pin marks on the inside. On two of them, the oil cooler inlets were misshaped and needed to be repaired. The prominent corrugations on the bomb bay doors are completely absent. Be prepared to spend time on cleanup and contour repair. I installed one ounce of lead in the nose, which was not enough – it is still a tail-sitter.

Included are two frets of detail/photo etch parts. One fret is finely silk-screened in color. The second has many small etchings. You had best dust off the magnifiers and sharp tweezers because you are going to need them. I used a plate of glass to cut on with a catch drawer under my model bench and still managed to lose some of the little buggers! These frets make the cockpit, gunners’ stations, and wheel wells with struts almost models by themselves. The main gear struts are extremely well detailed, which makes them very fragile to install in the wings. At times, the number of parts and detail are overwhelming. They also make the dated plastic molding beg to be cleaned up and improved with additional added plastic detail. I often found frustration setting in at the juxtaposition of the excellent detail of the Edward parts and the mold restrictions with inaccuracies and sink marks of the plastic. A package of thin clear plastic film is included for the waist gunner window doors.

This is the first time I had an opportunity to work with masks. One very comprehensive sheet is included. They are a big help with this kit, covering the intricacies of all the glasswork. Again, there is a requirement for a good sharp #11 blade, a good pair of tweezers, and a magnifier. An excellent guide for placement is in the instruction booklet, but at times it is confusing as to exact location. The wheel masks, included on the sheet, make painting the tires easy.

This is a kit with a great deal of potential. You will, however, need to heed your inner voice telling you to add more plastic detail to match the incredible photoetch parts. As with many highly detailed kits of bombers, most of the detail is not visible when it is finished. Like the recipe of spaghetti sauce, you will just know "it's in there." Edward is breathing new life into older kits with their excellent detail parts and I want to thank them for making this B-24 Liberator Mk IV kit available for review and IPMS/USA for the opportunity.