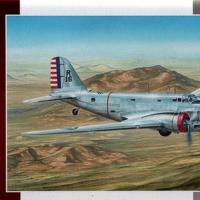 This kit is everything one expects from the Special Hobby label – an interesting subject not often kitted, superb casting with no flash, excellent detail, PE and resin parts, fine decals, and a bit of work to get it all together. Those with patience will be rewarded with a fine kit of a subject not easily available elsewhere.

Five sprues with 74 light gray and 30 transparent (yes, this plane has LOTS of windows!) greet one upon opening the box. There is a photo etched fret with 36 larger brass parts and at least that many smaller parts representing the levers. There are a number of extra levers for the control panel, and it’s a good thing. I have big thumbs.

6 casting plugs with 31 resin parts make up the bulk of the cockpit and the machine guns. These are very well cast and come off the plugs easily and with no breakage.

There are 2 pieces of film for the instrument panel, which work well also.

Five pages of exploded diagrams serve as instructions. The cockpit takes up the first page, along with the machine gun assemblies, which are put aside until later. Page two is getting the interior in. I found the many small windows did not fit well, and after getting one in, I used Future for the remainder. The larger nose and fuselage windows, as well as the turrets and main canopy, fit well.

I have had some experience with Special Hobby kits, and while the instructions would have you assemble the interior in two large parts, trapping them inside the fuselage, I know better. Continual dry fitting revealed that the two larger sub-assemblies would not fit if left as such. I built the cockpit up in situ in the left fuselage half, and then added the bomb bay to fit. Either way, the pilots’ seats sit too low in the cockpit and there isn’t enough room for that beautiful instrument panel to show. Quite a bit of trimming is required to get it all in, but it’s pretty easy work. You can see a difference in height between the 2 pilot’s seat in the photo; one is as built and the other is raised by jury-rig.

I recommend leaving the turrets out at this point; they will fit in later, even after painting. You will need to do some surgery if you want those nice resin machine guns to show, but nothing an intermediate modeler couldn’t do. Perhaps I’ll use that hot knife again. The upper turret is three pieces, and the fit is so sweet you won’t believe it really is three pieces when the kit is finished.

The fuselage went together and that’s when the fun started. While sanding and trimming the seam, I assembled the wings and stabilizers. The wing and stabilizer halves fit together surprisingly well, though filler was needed in a number of spots and I sanded down the trailing edges a tad. I was not able to complete all the sanding and rescribing to meet the deadline. The wing to fuselage joints will need a lot of work, and it should start before you cement them to the fuselage. Both wings and stabilizers have positive slot and tongue attachment.

Page four is just for the engines. The kit gives you 4 color options, all of which are in natural metal. One of these has different engines and nacelles. Both nacelle sets go together well, but will need filling both at the half joint and at the joint with the wing – this is very evident in the photo. The engines are plastic and the castings adequate at this scale. Inside the nacelles, they are not that visible.

Page five is the landing gear, which is fragile. I suspect purists will want to replace with fine brass rod, but I got mine together all right; I just wouldn’t want to transport the model very far. The gear is true to scale, as all the pictures I could find show the gear looking spindly on the real aircraft. The B-18 was, after all, just a logical development of the DC-2 commercial airliner.

One of the color schemes is for a Langley aircraft and the remaining three are for Hamilton Field planes based out of California. Markings look correct and properly sized. The pictures show that a lot of work is still needed before attempting one of the natural metal finishes.

I apologize for not having a finished picture to present, as this will be a very pretty aircraft in time, but my company deployed me to New Jersey for Hurricane Sandy on short notice, and I wanted to get the word out on this beautiful little kit while it was still available. I'll complete this review at a later time.

Many thanks to MPM for the kit and for the hours of enjoyment it brought, and to IPMS/USA for the review opportunity.