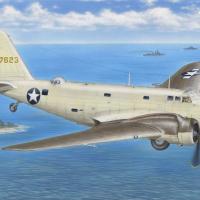 Special Hobby has issued a new release in their line of B-18 Bolos. This one is the ASW edition with radar nose and “mad” boom on the tail. It is a great addition to the B-18 series and a unique addition to any ones collection of large twin engine aircraft in 1/72 scale

This kit is the fourth in the B-18 Bolo series and is one of the more unique variants of this obscure aircraft. The kit is typical of Special Hobby in that it is a mix of styrene, photo etch, and resin parts and should still be considered “short run” so dry fitting and some slightly more advanced modeling techniques will be needed.

Before starting I dipped all the clear parts for this build in “future” floor polish. As there are a lot of windows and clear parts now is the best time as they are used throughout the build.

Construction starts in the cockpit and this is where most of the resin and photo etch parts will be used. The first few steps have you building the cockpit and observer seats which are plastic but with photo etch seatbelts, next comes the control panel and it’s a photo etch front with film insert and plastic rear. Then the control yokes are built. The most difficult part of the cockpit comes next, the center console, which is made up of both resin, photo etch, and plastic parts. I highly recommend wearing a magnifier for this because the control levers and switches are incredibly tiny. Step 6 has you building guns for the various positions (front, rear turret, and lower ventral tub) but in the photos of the real aircraft the guns don’t appear to be installed so I left them off my build. They are made out of resin. Once all the previous steps are dry step 7 has you installing them into the cockpit floor along with adding front and rear bulkheads and photo etch rudder pedals. One nice thing about the instruction manual is that it’s in color and shows you what color each piece is supposed to be. Nearly all the parts are interior green but there is some black and silver as well to help break up the single color. After the cockpit is built the next step is to build the rear area of the aircraft. Pay attention to the directions in step 9 because there are some areas in the fuselage that need to be opened for windows and some areas that need to be painted neutral gray. If you choose to use the kit windows now is the time to install them in the fuselage halves. Since many of them are quite small I decided to use testors window clear glue to replace them from the outside. Step 10 has you installing a platform into the nose of the aircraft and building the rear turret. You can have the turret extended or retracted. I chose retracted, to have the turret retracted you need to remove two pieces of plastic from the fuselage halves so as to let the turret sit in the fuselage. Step 11 will have you attach the nose piece of the aircraft to the right side of the fuselage along with the tail wheel well. I recommend doing this as it will help you figure out if there is any “step: in the nose when both halves are connected and thus you can fix it before the fuselage is glued together. If you don’t it could be difficult fairing it into the fuselage if there is a fit problem. Step 12 has you attaching the fuselage together, building the horizontal stabilizers, attaching the magnetic anomaly boom to the tail, attaching the overhead panel to the cockpit windows and attaching that to the aircraft. The stabilizers are not keyed so I recommend putting a piece of tape with an L and an R on the respective stabilizers until you attach them to the fuselage. The second major hurdle with this step is adding the cockpit windows, again dry fitting is a must as there can be issues making sure it’s all square. On my copy I had some fit issues but nothing sanding and constant checking didn’t fix. Once everything is attached the fuselage is done.

Step 12 starts the process of building the wings. The wings are made up of two halves each along attaching the upper engine nacelle parts. The kit comes with different upper engine nacelle parts so make sure you have the right ones (they have the exhaust molded into them) these inserts will give you some seams that need to be cleaned up but they aren’t too difficult to fix. Step 12 would also have you attach the wing landing lights and pitot tube but I held those off until the end of the build I recommend painting the interior of the landing gear wells on the wing parts before sealing up the wings so you can get into all the different corners. Step 13 has you building the engine cowls and attaching the props. Again make sure you have the right engine cowls as they are different for each painting option. I chose option A so I went with cowls D13 and 14. There are some resin parts that go on as well for both the cowl and the propellers. I kept the propellers off until the end of the build as well for ease of painting. Steps 14 and 15 have you adding the landing gear to the aircraft. Those were held off as well for ease of painting the fuselage. This ended the main part of the build sequence.

For this aircraft I went with camouflage option A which is an “oyster white” and olive drab. It’s a fairly rare and unique scheme so I mixed the oyster white by using Tamiya XF-2 and XF- wooden deck tan. In a 10 to .5 ratio (so 5 drops of deck tan for every 100 drops of flat white) it looked fairly close to what it should be based on the color in the directions. I first masked all the clear parts that were being used, using the Eduard mask set for the B-18, this included the cockpit and rear turret. I had to do my own for the nose under the radome Then I sprayed the plane with an overall coat of Tamiya White Primer to give the Oyster White some built in contrast. Once the primer was dry then I painted the fuselage, lower wings and stabilizer and mad boom in the oyster white. The tops of the wings and stabilizer were then painted in XF-62 Olive drab. Once this was dry an overall gloss coat was shot to prepare the aircraft for decaling.

The decals for this plane are relatively simple, national logos and serial numbers. The problem is they are incredibly thing and incredibly sticky. I nearly ruined both wing markings as the bars broke off the roundel on both wings and the serial numbers on the tail did not go on well either, they stuck instantly to the fin and no amount of water or solvent was getting them to move. I recommend extreme caution and careful pre-placement before adding the decals. The decals for the propellers never came off the backing and were left off. This finished the painting and decaling.

Final assembly involved painting the landing gear legs assemblies silver and the wheels rubber black with silver hubs. Also resin cowl intakes were added as were various antenna to the lower fuselage. Once the paint was dry the fairly complex main gear assemblies are attached to the fuselage after adding the main wheels to the gear legs. Give them plenty of time to dry so they will form a strong bond with the wing. Also at this time the tail wheel assembly and wheel were attached to the rear fuselage. When done the aircraft was flipped over and the last antennae were added to the upper fuselage. A final dull coat was sprayed, the masks removed and the build was done.

This kit builds up to a great representation of a rare variant of the B-18 Bolo. I highly recommend it to modelers of moderate skill level and for those that like big twin engined or unique aircraft. My thanks to Special hobby and IPMS for the opportunity to build it.