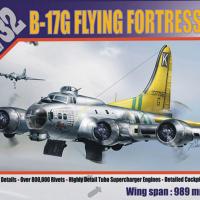 Thank you to Mr. Neil Yan of HK Models and the IPMS Reviewer Corps for the opportunity to review a wonderful new model release in large-scale aircraft. This final installment will describe the surprisingly quick last steps, and my thoughts and conclusions about this great kit.

All of the remaining clear parts went onto the model in very much the same way as the previous ones, with only a little flash in a few cases, and nice flush fit. Here, I encountered the first and really only negatives of the kit: both the top turret and the ball turret were a little bit tricky to work with. They both built up into nice assemblies for installation in the fuselage, but the overall very tight tolerances made it hard to get the turrets to pop into place like many other features. I would suggest test fitting earlier and more often than usual. Some of the top turret glass was a little bit warped and I am not sure that I ever really seated the panes snugly. The ball turret was similarly frustrating, in that I was unable to get the cross-beam to fit properly. But these are two very intricate assemblies at the end of a big project; it is very important to note that these comments are the only detraction from the kit thus far. The guns install nicely thought the sleeves in the top and chin turrets. But if you wish to have the chin turret barrels angled upwards to the side representing the guns in “safe” position on the ground, you will need to make some modifications to the sleeves.

The wheel wells consist of four tightly-fitting pieces with a separate hydraulic(?) tank. If you wish to have the gear extended, you are directed to install the retraction struts at this time, but I left them off until later. Installing the retractor arms after the main mounts was not at all difficult. There is plenty of room in the wells! The well assembly slips nicely into the lower wing halves, along with slide-in engine mount shafts.

The wings fit together without serious cleanup. You may get the impression that this is not unexpected behavior in this kit! The ailerons are assembled from two halves, and snap into hinge points much like the elevators and the rudder. The flaps are tricky to get into place; while the instructions suggest that the flaps can be added after the wing halves are glued, you may wish to try installing the flaps at the same time that the wing halves are built.

The superchargers consist of 3 pieces, and the completed superchargers pop into place without any glue. Given the large nature of the kit, the ability to glue these in later will really reduce masking for painting. The engines consist of multiple stacked parts, starting from a one-piece open cowl flap piece, exhausts, cylinders, etc., out to the prop mount. The propeller assemblies are a joy to construct, with 2-part hubs and 3 blades. The blades are keyed to fit in at only one pitch angle, but if you want to adjust the pitch, it shouldn’t be hard to do. Like the superchargers, the engine assemblies slide right onto the engine mount shafts. This slide-on, pop-in characteristic of parts is not trivial; it allows separate painting of components. As said before, the ability to remove and/or protect parts during painting is a huge plus.

The last parts to be added, not including the stand, are the main undercarriage struts and tail wheel strut, respective wheels and tires, and all the gun barrels. The main struts are stout, one-piece moldings, with different struts for extended or retracted positions. There are plenty of to-scale hydraulic lines to add. The hubs look right, the deep diamond tread of the main tires seems correct, and a smooth tail tire is provided. The tires are slightly flattened and can only installed with the flat part in the correct position.

The wings have a very clever slide-lock attachment system. When I did a dry-fit of the wings to the fuselage, the movement was a little sticky. A quick smoothing and polish of the mating surfaces allowed the wings to pop into position gently and firmly. I was concerned at the beginning of construction that the wing joints would be weak. That is not the case at all; the wing–fuselage joint is very strong, with little flex in the wings. The resulting joint is very clean, and will require little fill. In the accompanying photos, the wing roots are neither glued nor filled. They are almost invisible as “slid”. The last step is adding all of the gun barrels! I put measuring calipers on the barrels, and they have a 1.5 to 2 inch scale diameter. HK provides lots of barrels, so an installation mishap will not be a complete disaster.

There is a neat little stand/mounting bracket, but if you choose to use it, you must remember not to install the plugs in the bomb bay, way back in step 8 or so. I did not check to see if the stand holds and balances the model off a table, but as a mounting bracket, the model can be hung on a wall.

Wrap up and conclusions

Perhaps the most difficult part of this review was doing a “build” for the modeling community and not a super-detailing project. I started cutting plastic from the sprues on 18 Apr and finished on 5 May. If I were detailing, I might still be working in the cockpit. This kit has tremendous potential. There is lot of groaning and teeth-gnashing out there about the price. Bluntly, I think you will find the price well worth it. Yes, you can certainly spend less up front. But I think we all enjoy the extra effort of super-detailing more when we do not spend too much time compensating for poor fit and such in a cheaper kit. Granted, HK has no competition in this particular subject and scale pairing, but as far as quality-time-on-model goes, this kit is outstanding.

Given that no decals or paint schemes were provided for this pre-production review, I elected to wait on completing painting until HK releases a sheet with the box art subject, Milk Wagon, or aftermarket decals appear. I inquired with several aftermarket companies, and Kits World indicated that they have several 1/32 B-17F/G sheets available, with more in the works. The draft instructions have excellent CAD perspective drawings, and I am certain the final version will be clean and clear. Initial pre-release reports suggested that the kit would be an F/G, but HK will only be releasing this kit as a late G-model. The design of the kit with a separate nose, tail, and extra but different gun barrels suggests that different versions may be in the offing. I did not see anything in the kit that suggests an easy way for aligning the waist guns. A few extra parts are included, like the gun barrels, but there are others as well. Extras are always nice!

The built-up product looks like it should. I am certain that there a flaws somewhere and that something doesn’t match a photo of a restored warbird, and so on. But the bottom line is that the kit sits right, looks right, and simply feels right. I hustled on this build to get it out, and you may see signs of corner-cutting here and there in the photos. I did not count hours-on-task, but I believe it might be about 40 or so. Once again, I have no big surprises to report. I am delighted with the strong sense of excellent fit and quality about this kit; it is a super-detailer’s dream. I truly had a great time with this one. When I get the decals and the painting done, I will file an addenda review. If you happen to be at Nats this year in Loveland, I will have this baby at the review table.

I would particularly like to thank Mr. Neil Yan and the other good folks of HK Models and the IPMS Reviewer Corps for allowing me to do this review build. It is quite clear that HK Models spent a significant amount of time thinking through the kit’s design, listening to constructive criticism from SMEs (subject matter experts, Tom Cleaver’s term), and generally making things work like they should. I value the trust shown in me by HK and IPMS to complete this review as a pre-release. Have fun with this one!