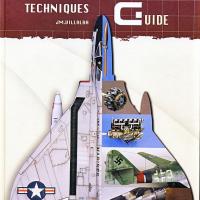 Review author’s note: I had difficulty finding this book on any US web site. It may be too new or only available in Europe. The MSRP is an approximation calculated from the MSRP in Euros with a W.A.G. factor added.

This book is the English translation of the original Spanish version. It is well translated but I did find several odd things which were easy enough to figure out. The publication consists of 8 chapters and a gallery of photos from people who are obviously master modelers to illustrate what can be accomplished with patience, skill, and technique.

By their titles, you can make an obvious conclusion of the subject material covered in each chapter.

Chapter 1, “Tools,” consists of photos and a brief descriptive label for each describing the photo’s contents and use.

Chapter 2, “Me. 262 A1A,” Illustrates basic assembly techniques out of the box, as stated.

Chapter 5 will show the “stand-off” technique for getting a wavy line. It’s an interesting technique which simplifies and reduces airbrush overspray when blending the transitions between colors in a camouflage scheme.

Chapter 6 describes detailing, assembly and painting of a jet airplane. Now things are starting to come together. Adding details such as seat belt buckles and hoses and pipes are covered in depth. Use of painting effects such as pre-shading and post shading to bring out panel lines and rivet details are described. Also included is decaling methodology in a side block.

Chapter 7 is most interesting with scratch building parts, using a helicopter model as an example. Topics include cockpit detailing, scratch building instruments, detailing rotor heads, extra scratch details such as hinges, and dealing with large transparency areas to keep them clear and authentic in appearance and thickness.

Chapter 8 was, again, of particular interest. The Ki 43-I chapter shows how a “corrugated” effect can be achieved in the aluminum skin of an aircraft. The effect may be more appropriately called “adding stressing to aircraft skin”. This is the wrinkling effect from pre-stressing as the skin is riveted, to stressing from the rigors of combat action. This is something I never considered when building aircraft such as the B-52 “BUFF” and C-130 which show high degrees of skin stress due to age and heavy use.

There are many books on model building. This book can be added to the top end of the list. It is detailed, heavily illustrated, and leaves nothing out. Any technique or method in any chapter can be applied to any era of modeling you prefer, from WWI to Modern. Assembly, detailing, painting, post- and pre-shading, decaling, best handling of transparency parts – you name it, you will find it in this book. Topping this off is a gallery of photos from European (Spanish) modelers which caused me a great deal of envious heartburn.

Whether or not this book makes you a great modeler is up to you and your talents, but you will definitely learn from it no matter what your skill level.

Thank-you to EuroMODELISMO Accion Press S.A. and IPMS/USA for this copy to review.