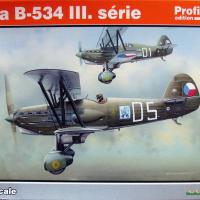 The Avia B.534 was developed in 1934, and although obsolete by the time WWII started, it was used in combat as late as 1944! The 534 went through a few changes along the way, most notably the cockpit and landing gear. A 534 is credited with having been the last biplane to record an aerial victory (A Hungarian Ju 52 on Sept. 2nd, 1944).

Inside the box are 4 sprue of grey and 1 of clear plastic, a decal sheet, photo etch fret, a sheet of painting masks and a 16-page instruction booklet. The plastic is is nice with very fine lines, little to no flash and no noticeable sink marks. The pre painted photo etch looks nice and the decals are very nice. One thing Eduard did was scale back on the photo etch fret as it looks like they give you just the parts needed for the III.Serie.

Starting with the interior, which is mainly the pit, you have the option of using the photo etch or not. If you do, there is some minor surgery you must do, but it’s not too bad. The only area to watch out for is the control panel installation, as it attaches to the upper cowl part (D3), then you place this on the assembled fuselage. If you have done something wrong, and I did, it will not fit right, so make sure you have everything in the pit just right, or it will lead to problems down the road.

Next is the lower wing, stabilizers, and rudder, and Eduard was nice enough to show the dihedral needed for the lower wings, and you WILL follow this or the upper wing will not go on. So far everything has fit pretty well and I have enjoyed the build…. then disaster!

Now we place the upper wing, and I had read some build articles before mentioning/WARNING about the join areas for the struts. I decided to do this totally out-of-box and paid for this. The connection points for the struts are ‘pimple & dimple’, and are nothing short of frustrating - so frustrating to me that I put the kit on the shelf for a bit lest it take flight. Why Eduard chose to do this is a good question, but it’s their kit, so we have to live with it. I recommend adding a wire pin to the strut ends, and YES, this will be challenging as the struts are thin, but the small amount of frustration at doing this will save you a whole lot more later on. Eduard supplies you with photo etch turnbuckles, but as I learned, they are fragile. I decided to just drill into the wings and set my rigging (transparent sewing thread) that way. Which leads to another problem with this kit. The rigging diagram leaves much to be desired, they give you one but I ended up using pictures of the real thing to guide me.

Next up we have the undercarriage and the connection areas are pimple & dimple for the forward strut and flush for the rear! It is a challenge and can be built but I recommend drilling and pinning them as over time I’m not sure this can support the weight. After this are the bombs and prop, and what is interesting to me is the braces that hold the bombs have a tab that fits into a hole in the wing! Why couldn’t they do this for the struts?

I used Tamiya XF-49 (Khaki) for the upper surface and AS-12 (Bare Metal Silver) for the underside. The decals went on nicely and only a small amount of micro-set was needed in a couple areas. You are given 4 marking options:

Even with the problems I had, this is a great kit of a beautiful aircraft, and would like to see Eduard tool it in 32nd someday.

I would like to thank Eduard for supplying this kit, the Review Corps for letting me build it (and being patient with me for being late), and all of you for reading it. MODEL ON!!!