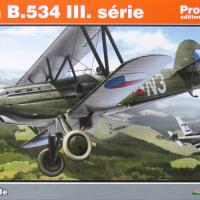 The Avia B.534 was developed in 1934 and although obsolete by the time WWII started it was used in combat as late as 1944! The 534 went through a few changes along the way most notably the cockpit and landing gear. A 534 is credited with having been the last biplane to record an aerial victory (A Hungarian Ju 52 on Sept. 2nd, 1944).

The first three steps are devoted to the well detailed interior (24 pieces make up the interior of this kit) and everything went together easily. Once the fuselage halves are closed up it’s time for the horizontal stabilizers / tail and Eduard has engineered it so you can basically snap them into place without using glue. (Yes, I used glue) The same can be said for the lower wing assembly, but make sure you pay attention to the dihedral of the lower wing, as it can make assembly of the upper wing a bit of a pain if you don’t. The upper wing is where I had my problems with this kit, and most of it was my doing. I decided to attach the interplane struts to the lower wing first, then add the upper wing, and finally the cabane struts. So far, so good…..almost. The strut attachment points are just ‘pimple & dimple’ joins, and getting them to stay was a bit of a chore, especially when the dihedral of one lower wing was off a bit. (Remember just a bit ago when I warned you about this!) With the cabane struts at an angle and attaching to the side of the fuselage, I managed to dislodge them - more than once - so use care when working in this area. If it were 48th scale, I would have just added pins to the struts, but in this scale and with my old Mk. 1 eyeball, NOT gonna happen!

Once all of this is together it’s time for the final bits like landing gear, horizontal stabilizer struts, prop, windscreen, gun sight, bombs and pitot tube. The only problem here is the landing gear have the same problem the cabane struts do. Again, if it were 48th scale, pins would have been added. For the rigging I used .005 Nylon sewing thread painted aluminum, I know there is better stuff but this is what I’ve used for years. Synthetic hair was used for the aerial.

You are given 4 marking options in this kit:

I decided on #2, and the decals went on very well, with just a little help from some Micro-Set.

This kit is outstanding and Eduard has done a great job with it. This is a very nice and well detailed model, but I will only recommend it to modelers with some experience with bi-planes. Now if Eduard would come out with the Aero A.100 or maybe an Avia B.21…...PLEASE.

I would like to thank Eduard for supplying this kit, the review corps for letting me build it and all of you for reading this. Model on!!!

Cockpit assembly - in relation to the size of a dime.