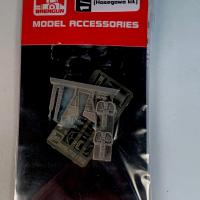 This set provides an upgrade for Hasegawa’s AV-8B Harrier II kit and provides a complete overhaul of the kit cockpit and along with a number of photo-etch details for the exterior of the aircraft.

The cockpit parts include photo-etch rudder pedals, sidewalls, replacement tops for both the left and right-side consoles, two different main instrument panels, a photo-etch HUD bracket with clear film for the reflecting glass, and photo-etch harnesses and other upgrades to the ejection seat. The two instrument panels give you the option to model either an early AV-8B, such as those that saw combat in Desert Storm, or an AV-8B Night Attack Harrier or AV-8B+. The early panel has a single multifunction display, while the Night Attack Harrier and the AV-8B+ panel has two multifunction displays. The casting for each instrument panel is outstanding with exceptionally fine detail.

I decided to build an AV-8B Night Attack Harrier, so I painted the appropriate instrument panel Tamiya NATO Black and used acrylic paints and a white colored pencil to make the dials and gauges pop. I painted a thin layer of Tamiya clear green on the multifunction displays to give them a little depth and then placed a drop of Future in each instrument dial and on each MFD to simulate the instrument glass or the display screen. The side consoles are also exceptionally well cast and again I painted them Tamiya NATO Black and used a white colored pencil to highlight the knobs and switches.

Hasegawa’s kit seat is very basic and the Brengun set gives it a major upgrade by adding lap belts, the shoulder harnesses, a new headrest, the ejection handle and several other smaller details along the sides of the seat. Brengun’s instructions do not provide any painting details for the seat, so check your references or go online to find photographs of the SJU-4 ejection seat used by the Marines in their AV-8B’s. Duke Hawkins’ recent book on the Harrier II has some excellent photographs of this seat.

The set includes new side panels for the inside of the fuselage halves. Be sure to remove the small section shown on the instructions before supergluing them into the respective fuselage halves. Once these were installed, I painted the fuselage interior and the Hasegawa cockpit tub Testors Modelmaster Dark Gull Grey (FS36231). I then applied a black wash to the side panels to bring out the molded details. Next, I removed the molded rudder blocks from the kit cockpit tub and replaced them with the photo-etch rudder pedals. Then I superglued the replacement side consoles onto the kit cockpit tub and checked its fit inside the kit fuselage halves.

While painting the replacement instrument panel, I happened to set it down beside the kit supplied panel and realized that not only was it much more detailed than the kit part, but it was also deeper and wider that the kit part. To verify my suspicions, I inserted the cockpit tub between the fuselage halves and then taped the two fuselage halves together. Next, I tried to insert the new instrument panel and discovered that my suspicions were correct – it would not fit as it was wider than the cockpit opening and taller and wider than the instrument panel coaming. I un-taped the fuselage halves, measured how much I would have to remove of the kit instrument coaming and broke out the razor saw. To ensure that I did not remove too much of the coaming, I removed small slices of it, one at a time, checking the fit of the new panel each time until I had removed enough for the panel to fit where it was supposed to be. I then used a sharp Xacto blade to cut a notch in the kit side rails next to the coaming to widen the opening for the instrument panel. Once happy with the fit on one side, I repeated the process on the other side until I was able to slide the new instrument panel into place. Surprisingly, there is no mention of the need to do this surgery anywhere in Brengun’s directions.

Once I had resolved the fit issue for the instrument panel, I glued the cockpit tub into one fuselage half and joined the two halves together. Once this assembly had dried for a couple of days, I inserted the painted instrument panel, refining the fit with sanding sticks and an Xacto blade, and then glued it in place with superglue. Since the new panel is still wider and taller than the kit instrument coaming, and my cuts were not as perfect as I had hoped, I used some Mr. Surfacer to blend together the new instrument panel and the coaming, and then painted the entire assembly NATO Black.

The last item to be installed was the HUD bracket and glass. I held off installing the HUD until I had completed assembly of the kit and the filling and sanding of the seams in order to avoid knocking it off or destroying it. In fact, I did not install the HUD until right before I attached the kit windscreen, just to be sure. The HUD bracket is provided as a photo-etch part and is easily bent into the proper shape. I touched up the black paint after bending it to shape and glued in on top of the instrument panel. I recommend completely assembling the HUD, including the two film panels, and then gluing it in place before attaching the windscreen. Otherwise, you could spend a lot of time fishing the films out from under the windscreen if you drop them before they were in place.

The photo-etch fret includes three rear-view mirrors for the main canopy, which I painted flat black for the back side and the frames, and chrome silver for the mirrors themselves. There are also two small photo-etch parts for the front edge of the main canopy that are either handles or possibly part of the environmental control system piping, but they are much too small for my eyes to tell. I painted both of these black as well based on photographs.

The set also includes photo-etch replacements for several aerials or sensors on the Harrier II. I wish Brengun had reversed the order of the diagrams showing the installation of these items as the last diagram should actually be the first diagram for the set as it shows the installation of a couple of sensors inside of the kit intakes, which will need to be installed before you join the intakes to the fuselage or the fuselage halves together.

This is a nice set from Brengun and provides a nice upgrade to the Hasegawa AV-8B kit. The only real issue I have with it is that there is no mention of the need to cut back the instrument panel coaming in order to get the new instrument panel to fit, so someone might assume that it has to fit somehow and not do the surgery like I did.

Thank you to Brengun for the review sample and to IPMS-USA for letting me review it.