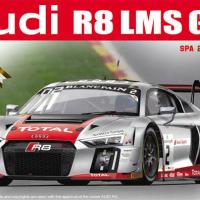 Platz and NuNu have partnered to release a series of automotive subjects and accessory packs to build up some neat cars. In this case, it is the Audi R8 LMS GT3 which is a beautiful vehicle. It is a mid-mounted V10 engine sports car, and the GT3 version has been delivered to many racing teams around the world and is very active in endurance races and GT races. This model, in 1/24th scale, reproduces the AUDI R8 LMS GT3 in the Macau race of 2015. Inside the box are 8 sprues of white and black parts and one clear sprue plus rubber tires, decals (lots of them) and a small sprue of poly caps. There are two sets of markings included as several cars were entered in this race- one silver and one red representing two different drivers.

Construction consists of two part- the chassis and the body. The chassis is complete as far as cooling and the interior go. Paint call-outs are in the Gunze ranges. Watch for decal call outs such as the brake pads, fire bottle (I think) and others. These are noted with a smaller circled number relating the actual decal number. The seat is provided with decal seat belts and with the closed car, they look OK. The engine is an insert you can see through the back window. Multiple parts are added and being a V10, it takes up a lot of space. Roll cages surround it all and the tires are added last.

The body is second and I started by adding all the needed air effects and painting the interior. I left the windows off at this point. And also the spoiler. I elected to paint the red, white and black colors after trying some of the decals, they are thick for opacity, but it took a lot to settle them and painting using the decals as masks was easier. I used Tamiya lacquer for the red and white and black from their acrylic line, all gloss and build up the colors. After several touch ups, I had a nice glossy finish.

It was time for decals; LOTS of decals. Note that some of the decals have a specific order to maintain the correct look. Also, there are several superb metallic decals for things like the Audi rings and the like. Please note that these stick like grim death, the front of the hood grabbed and it is a bit lower than it could be. They look great but be aware that once they touch the paint, they stick and will not be moved or come off. That being said, most went on very well and settled and I followed with 4-5 coats of clear gloss.

To finish the model, I added the decals to the windows and installed them. Note that the front windshield goes in from the bottom, so it needs to be installed before adding the body to the chassis. Several of the parts are notably flat versus glossy like the black on the sides of the car. Lastly, I mated the body to the chassis. It took a small amount of coercion but in the end, it snapped in place. A little glue and touch up and done.

This is a great kit and fun top build. Details that you might want to add are stuff like brake lines, engine wiring and the like but in the end, it looks great. Recommended.

My thanks to Platz/NuNu for the chance to build this beauty.

Roll cage and Interior
Previous Next