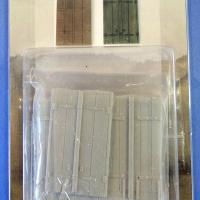 These shutters make a very nice diorama accessory and are a nice addition to building windows.

The package includes 10 cast resin parts, 2 pairs each of 5 deferent shutter styles. The styles include two pairs of louvered wood shutters, two pairs of metal shutters, and two pairs each of 3 different wood style shutters. Each set of shutters includes two shutters molded in the closed position, as if closed over a window. All but one of the shutter sets includes center astragals over the joint between the two shutters. The astragal will need to be dealt with if the shutters are cut apart and placed on each side of the window in an open position. The pair of shutters measure 1-3/4” tall by 1-1/16” inch wide, or 5 feet tall by 3 feet wide at 1/35 scale.

If similar shutters for more than two window openings are required, it will be necessary to purchase additional packages of the shutters. It would be nice if each of the shutter types were available separately to accommodate projects with more windows. There is some room above and below the hinges to allow cutting the shutters to be a shorter height. The metal shutters do not have as much space for height adjustment.

If the shutters are to be placed on each side of a window in the open position, they will need to be cut apart and reversed side to side so the hinges are on the window side. This will put the exposed metal straps on the inside of the shutters.

Two of the shutter sets are in a bi-fold configuration with center hinges. To be used in an open position all four parts of the shutters would need to be cut open and glued back to back.

I have a diorama of a WWII French building and wanted to try the shutters. Using one of the wood style shutters, I sanded the back of the molding to flatten the piece, cut off the top and bottom to match the height of the window, notched the top and bottom for the joints between the wood boards, cut off about one board on each of the shutters to obtain the correct with for the window, touched up some of the bubbles with superglue, and painted the shutters German gray to match the windows. A light dry-brushing with Vallejo Old Wood brought out the wood texture. The shutters were reversed side-to-side to get the hinges on the inside so they can be shown in the open position.

The shutters look very nice when installed and only took a few minutes to resize and install. A nice set of details and a good addition to building dioramas.

Thanks to Add On Parts for producing these nice details and furnishing the review samples to IPMS.