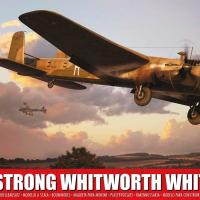 The Armstong Whitworth Whiley was a British twin-engined bomber that was in service at the start of WW2 and was the first to drop bombs on a German-held territory. Although it was slow and could only reach 15,000 feet loaded, it was a significant contributor at the beginning of the war.

The kit comes molded in a light gray plastic that is somewhat soft, but has a sturdy box. Looking into the box one sees that the elevators and rudders come as separate pieces, but the ailerons are molded to the wing. The tires have the flattened look and there are some sink marks in the bomb bay doors. Not knowing much about this plane, I followed directions and found that part D.32 did not fit well. It needed to be cut in half to allow it to fit in place.

The interior detail is nice and has an option to have the navigator table in either its down or stowed position. The glue seemed to take a little longer than normal to hold parts together. All went well with the construction on the air frame, but if you want the bomb bay doors open you need to cut into four separate pieces. Additionally, there were sink marks that should be sanded out on the fins and horizontal stabilizers.

The landing light opening has no backing part so one may need to be scratch built. The propellor shafts needed to be filed down to fit into the hole in the nacelle, and it is necessary to drill your own hole to mount the ADF antennae. The turrets were difficult to install and the clear parts didn't fit well. However, the canopy did fit very well. The slit windows had a long tab to easily glue them into place without smearing glue on the windows, but I opted to use glue windows. I also cracked the chisel shaped nose glass trying to get it in place since it was under a lot of pressure.

The paint chart calls out Hornby paint codes and does not refer or cross reference any other manufacture paints. The decals were fine and gave you 2 options to choose from. One airframe was an all black machine and the second option was a camouflaged scheme. With some adjustments, the finished kit is a nice looking representative of the original.

Thank you to IPMS USA and Airfix USA for the opportunity to review this kit.

Back right view of model

Back left view of model

Underside view of model
Previous Next