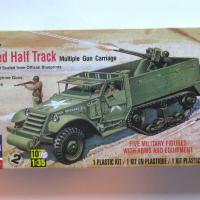 The Half Track was used in virtually every theater of conflict during WW II and the Korean War. It proved to be a very versatile vehicle, with a top speed of over 40mph. The M-16, as it was officially designated, could be equipped to transport troops or different types of armament. This kit represents the M-16 fitted with twin .50 caliber machine guns in a power operated turret. The Half Track was a big vehicle, with an overall length of more than 256 inches. It was also heavy coming in at 20,767 pounds, which is over 10 tons. Part of the weight was due to the ¼ inch thick armor plating. The engine produced 140 horsepower put through an eight speed gearbox. The power was delivered to both the front wheels and the rear tracks.

Upon opening the box there are 2 bags containing the sprues of green injected styrene, a bag containing 2 vinyl tires, a small clear sheet (for windows), two rubber tracks, decals and a 12 page instruction booklet. This kit dates back to 1957 so be prepared for lots of flash and many pin marks, both raised and recessed (gives you something to do while watching reruns of Adam-12 & Emergency).

15 steps (most broken up into 2 or more sub-steps) are needed to build this kit. Starting with the frame & cab everything fit pretty well except when I tried to place the dashboard (Part # 15). It did not fit tight (It has to, so as to hold the doors in place). I ended up having to squeeze both sides while placing the cement (Tamiya thin) and this worked fine - that is until I tried to place the engine cover. I had to use a sanding stick to take a little off the sides of the cover. Is it the kit or something I did? I do not know. The instructions show to put the steering column in before the driver and that’s what I did. Trust me, put the driver in first or yours will end up like mine with the driver as a passenger! Finishing up the cab with the windows was put off until after I had painted everything. Monogram was kind enough to put a template in the instructions to make cutting the clear film easy.

Moving on to the rear compartment and wheels/tracks where everything fit well and construction was simple. The idler and drive wheels are both two-piece affairs that snap into place, but there is some mold lines that must be dealt with or the wheels will not turn. The road wheels, return roller and their suspension are molded into a two piece assembly - which makes it so much fun to paint!! The tracks are rubber band style that allegedly need no glue - yes, yes they do. The problem though is glue does not work on these. So going back to my youth, I put 3 pieces of wire through them and it worked. I like these kits but maybe a new track is in order?

The twin .50s and their power turret fit together well, EXCEPT, in my sample one of the pieces (#50) had to be altered just a bit as the hole for the seat (part # 52) tab was slightly forward of where it should have been. This resulted in the guns not being at the same level. I just made the hole bigger and filled it in with super glue/talc mix and all is well. No other problems were encountered and the gun assembly fit nicely in the rear compartment.

I used Testors Model Master Acrylics on this and after a couple coats of Future, placed the decals. They are well printed, a bit on the thick side but went on easily and snuggled down with a little Solvaset.

How many of us started modeling with these kits? This kit dates to 1957 and shows it; HOWEVER, it still fits together pretty well, looks the part and was just plain fun to build. This is another of those inexpensive kits I highly recommend so you can build to practice on or even better, give it to a younger modeler to get them started in this great hobby!

I would like to thank Revell for providing this kit, the review corps for letting me build it, and all of you for reading it.

Whats in the box
Previous Next