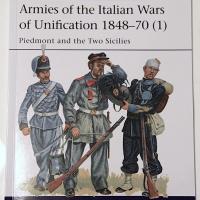 This title is from Osprey’s well received Men-at-Arms of books. It is number 512 in the series.

Piedmont and the Two Sicilies

The creation of the modern nation of Italy was a complex and bloody process involving not only three wars between Italian and Austrian armies, but also bitter clashes between Italian regional forces and insurgents. This first of two books describes the two largest Italian armies, which at first briefly fought in alliance against Austria, but later confronted one another. It explains the evolving organization, uniforms and weapons of the armies of Piedmont (the Kingdom of Sardinia) and Naples (the Kingdom of the Two Sicilies) and is illustrated with contemporary prints and new full-color uniform plates.

These books are great reference materials for figure modelers! This book consists of:

The Historical Background gives the reader the situation in Italy and the Italian states in 1847. The most important battles of the “Risorgimento” or “Resurgence” or the Wars of independence from Austria were fought near major cities. The dates were First War 1848-49, Second War 1859-61, Third War 1866. The most influential revolutionary movement was the Carbonari, a secret organization initially formed in the south but soon active elsewhere that pursued the parallel causes of constitutional government and independence.

The Chronology for the First War of Unification 1848-49 gives a month by month detailed description of what happened during this year.

The Piedmontese Army 1861 to 1870 was the main military driving force of the Risorgimento being the only unit in Italy with levels of professionalism comparable to the major European armies. Despite good performance during the early months, the First War of Unification ended in devastating defeat. This section highlights the Line Infantry, Cavalry, Artillery, Engineers, Royal Household Companies, Cacciatori Franchi, Cabinieri, National Guard, and Naval Infantry. Also, there is a description of the weapons used by the Infantry, Cavalry, and Artillery.

The Italian Army 1861-70. The Italian Army was established on 4 May 1861 and assimilation of the northern and central Italian troops into the former Piedmontese Army was straightforward except for the “Brigandage” which were a guerilla unit, and the Garibaldi’s volunteers who were a popular political unit. This section details the resulting organization and the weapons they used.

The Army of the Kingdom of the Sicilies were located in southern Italy and the island of Sicily. This section details the organization of the Guard Infantry, Guard Cavalry, Line Infantry, Foreign Infantry, Light Infantry, Line Cavalry, Artillery, Engineers, and Gendarmerie. There is also a description of the weapons used by each unit.

What is really nice is that there are eight pages of color plates of the uniforms as worn by the Piedmontese Army, Italian Army, and other units involved with explanations.

My thanks to Osprey and IPMS USA for the opportunity to review this great book.