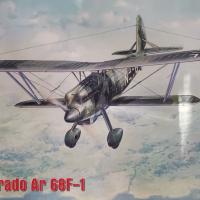 The Arado Ar68F kit by Roden is one of two version that they produce, the other being the “E” version. The bulk of both kits are the same with the exception of the sprue containing the cowling parts, since the E and F used different engines. The kit contains around 100 nicely molded parts in a medium gray plastic plus a clear plastic windscreen. There are no photo-etch or resin parts. Instructions are provided in black and white on 8 pages in 15 steps. There is also a separate two-sided sheet with two of the color schemes shown in color. Decals are provided for three marking options, all of which are very different from each other. A standard RLM70/71/65 option is included, along with an overall red machine with a white lightning bolt/arrow running the length of the fuselage and a white skull and crossbones on the vertical tail. There is also an overall RLM63 gray machine with blue trim around the cowling and along the spine of the fuselage, which is the version that I chose to model.

The plastic is slightly soft, which makes sanding easier and also helps with removal from the sprues of some of the more delicate parts. I used a fine razor saw to remove most of the parts. Mold seams were not too bad, but some parts still needed some cleanup here and there. There are a couple of minor sink marks on the lower fuselage and on the back of one of the prop blades that have to be filled.

Construction starts with the cowling. The exhaust parts are provided as separate parts – six on each side – and each one requires cleanup of the sprue attachments. I drilled out one end on each part, painted them and then left them aside to attach after the painting was done. I also did not attach the guns or instrument panel until after painting. You have the option of an open or closed oil cooler vent and I chose the closed option. Most of the pictures I found showed it closed. By the way, a very valuable resource for me was Classic Colours Luftwaffe Colours, Volume One, Section 1: Jagdwaffe – Birth of the Luftwaffe Fighter Force by Eric Mombeek. There are many pictures of the Ar68 both in flight and on the ground.

The next couple of step deal with the rudder and tail wheel and then we finally get to the cockpit. The cockpit is very nicely detailed and really only needs seatbelts to make it complete. I had some Eduard steel pre-painted seatbelts left over from another project and I used them. It would have been nice if Roden had supplied a decal for the instrument panel, but it turned out OK just painting it. Since there are no locator pins it was a little fiddly getting all the cockpit parts together. Attaching the floor to the tubular side frames seemed to be the best plan of attack as it helped get the framing lined up pretty well. I used Testors liquid glue in the black triangular bottle which gave me a little more working time. An extra set of hands probably would have been helpful also. There is also a lovely little pistol which goes under the cockpit coaming, and although the location is vague in the instructions, there is a tiny dimple on the starboard side that I attached it to.

Attaching the flaps to the upper and lower wings comprised the next couple of steps. The wings are provided as a one piece upper wing and left and right lower wings. A U-shaped step attaches to the port lower wing, but I left that until later to prevent it from getting knocked off during construction. Holes for the step are provided on both lower wing parts, but all the pictures that I saw showed the step to be on the port side, so the holes have to be filled in the other lower wing. I noticed in many of the pictures that the flaps on the upper wing were deflected slightly – one slightly up and the other down – so I glued them accordingly. In retrospect, I should have waited until after the entire airframe was together to attach them because it caused problems trying to get the wings parallel in my biplane jig.

After gluing all the main landing gear parts together, step 14 deals with bringing all the fuselage components together and here is where some guesswork is necessary. For starters, part B-15, which attaches to the elevator and rear fuselage, is not shown but it is fairly easy to tell where it goes. The instructions also show two options for the tailwheel, so check your references. Part 6-A is shown to attach to the two pins on the back of the seat (part 5-D), but I found it easier to glue it to the top of the cockpit framing. I also had to add a spacer made from sprue to spread the forward part of the fuselage slightly so that it aligned better with the cowling. I can’t say whether that was a fault of the kit or the builder.

After getting the fuselage together and the lower wings and landing gear attached, I drilled some small holes in the appropriate spots for the rigging. The instructions do not include a rigging diagram, but the instructions for Rodens Ar68E do have a rigging diagram so I referred to that along with the box art and photographs from the Jagdwaffe book mentioned above.

I then moved on to painting. I used AK Real Colors RLM 63 for the entire airframe, then used Vallejo Deep Sky Blue for the trim color. The painting instructions indicate that the lower surfaces are red, but that is incorrect.

After painting it was time to move on to adding the struts and upper wing. This was a bit of an adventure for me, but in the end everything turned out fine. I am not an experienced biplane builder, so I can’t fault the kit too much. I thought the attachment points could have been a little more robust, but when everything was together it made for a very sturdy assembly. As I expected there was some touch up painting to be done afterward, but nothing major. I then applied a coat of Future and applied the decals, which did not take too long. The decals went on nicely with the aid of Micro Set and Sol, although there was just the tiniest bit of white that showed out of register on the balkenkreuz decals. I messed up the two-part swastika decal that goes on the tail, so I had to dig out a Techmod sheet of swastikas from my stash.

The rigging is not too complex, which is a good thing for a biplane newbie like me. I used steel wire cut just slightly long and placed them in the holes that I had pre-drilled, adding a drop of thin Gator glue to keep them secure. The small windscreen was also attached with Gator glue and the antenna wire was added with fine E Z Line and the Arado was done!

This is a nice little kit with some colorful marking options. The fact that it is a limited run kit means it is suitable for intermediate or advanced modelers, but it is well worth the effort. And the limited amount of rigging makes it a good starting point for somebody just getting into biplane modeling.

I sincerely recommend this kit to anyone who has an interest in 1/48 Luftwaffe aircraft. Many thanks to Roden for the review kit, and also for producing kits of lesser known subjects.