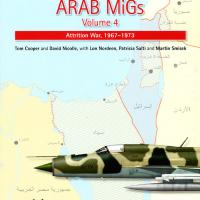 Tom Cooper and David Nicolle's Arab MiG series is an incredible history that addresses the Arab air forces of Algeria, Egypt, Iraq, Jordan, Lebanon, Sudan, Syria, and Yemen after the June 1967 Six Day War until 1973. Although MiG aircraft dominate the story, all Post-WWII Arab aircraft are included. The authors have been able to access official archives as well as the combatants involved to provide a unique perspective of the Middle East conflicts. Volume one in this series, published November 19, 2009, covered the background of the Arab air forces from 1955 focusing on MiG-15 and MiG-17 fighters. Volume two, published October 19, 2011, addressed the Arab air force supersonic fighters from 1956 through 1967. Volume three in the Arab MiGs series focuses on the Arab air forces in the June 1967 War and was published October 24, 2012. Two additional volumes follow in this series, all with the same thick 256 glossy page count. I counted 162 black and white photographs, 47 color pictures, 22 color side profiles, and eight maps.

Dr. David Nicolle, born in London in 1944, is a military historian specialized in the history of the Middle Ages, specifically, the Middle East. Dr. Nicolle worked for BBC Arabic and earned a Ph.D. from the University of Edinburgh. A prolific writer on military historical topics, his interests include military aviation in the Arab and Islamic theatre. He was a history professor at Yarmouk University in Jordan from 1983 till 1987. Dr. Nicolle has been quite prolific with dozens of television documentaries and more than one hundred books and even has a Wikipedia page.

Patricia Salti, of British nationality, worked on the staff of Crown Prince Hassan. She is the widow of Lt. Muwaffaq Salti, a Jordanian national hero, who was killed November 16, 1966, in air combat with Israeli Mirages. Lt. Muwaffaq Salti spent two years in the UK training with the Royal Air Force before returning to Jordan to fly Hawker Hunter jets. Patricia Salti has become a leading historian of the Royal Jordanian Air Force.

This fourth volume in the Arab MiGs series with a focus on the aftermath of the Six Day War of June 1967 and the lead-in to the October 1973 War. Starting off with an introduction, acknowledgements, and three pages of abbreviations, this volume then addresses seventeen pages of addenda / errata from the first three volumes of Arab MiGs. The addenda / errata adds a substantial amount of additional photographs and information that has come to light since the first two volumes were published, kicked off with two Royal Egyptian Air Force Vampire T.Mk 55s. Then we get into the meat of the aftermath of the Six Day War and the build up to the October 1973 War with six Chapters. I would note that each of these chapters comes complete with footnotes at the chapter’s end. Completing this volume are four appendices, a bibliography, and an index.

I was amazed at the superlative effort presented by the authors. The authors have never-before-seen data, stories, and photographs that enrich the storyline. This includes interviews and combat reports over the backdrop of the political turbulence exacerbated by the Cold War between the US and Russia. I know such experiences are not necessarily accurate as the claims often can be inflated due to the heat of battle and don’t necessarily stand up to scrutiny once the opposing side’s story is included. Nevertheless, these first hand experiences put the reader inside the battle. The storyline follows events chronologically from the end of the 1967 war to the beginning of the 1973 conflict. There were several skirmishes with the Israeli’s over this period, but this period was primarily a time of correcting the Arab Air Force’s mistakes. This meant reorganization, improved training, more pilots, better weapons, and improved intelligence leading to significant growth in most of the Arab Air Force capabilities.

There are many great stories in this book and one that still stands out I my mind is on ‘Hijacked’ Phantoms which ends with a nice political cartoon that was published in the Air Force Magazine. In this case, the US was focused on ‘maintaining’ a balance of power between Israel and its neighbors and was prepared to maintain that balance with Douglas A-4 Skyhawks and Northrop F-5 Freedom Fighters. That was not going to be acceptable to the IDF pilots who had already test flown the Northrop F-5 and who were focused on the Phantom II to combat the Soviet infusion of MiGs to the Arabs. LBJ eventually decided to provide the F-4Es based on several conditions (i.e. supporting the ‘free world’s efforts in Vietnam’, etc.), all political, that the Israelis had to support. Of course Israel got their Phantom IIs, and LBJ did not get any of the political support he was looking for from Tel Aviv.

Tom Cooper, David Nicolle, Lon Nordeen, Patricia Salti, and Martin Smisek have delivered an incredible tome in Volume 4 of this series. I must state that this is not a mere photographic essay, but an in-depth pursuit that will take you some time to assimilate. I had seen this book at IPMS Nationals, but had passed it by. Now I need to go buy Volumes One and Two. The rare photographs are aligned with the timeline and illustrate the text greatly. My thanks to Casemate and IPMS/USA for the chance to review this excellent book.