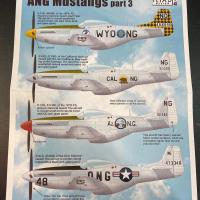 The P-51 in Air National Markings have always interested me and when I saw Iliad Decals was releasing another sheet with them, I couldn’t pass it up. Ironically the Ohio ANG marking included on this sheet was one that I had considered including for the 2009 and the 2015 IPMS Nationals Decal sheets but never made the cut. I am pleased that Iliad decided to do this particular marking.

Their ANG Mustangs Part 3 includes markings for 4 different states: Wyoming, California, Arizona, and Ohio ANG units. The Wyoming Mustang is by far the most colorful on the sheet with its checkered tail and I had considered doing this one for the review but I discovered that the decals didn’t size up to the Airfix kit correctly. I did eventually size the checkered decals to a Tamiya kit and found that they are sized perfectly for the Tamiya kit. I’m hoping I will be able to get around to building that one soon.

I had never used Iliad Decals before and I was really surprised in how thin and quickly they adhered to the natural metal finish of the kit. I had a few nail biter moments with just how well they stuck to the surface in trying to positioning them but a little patience and hot water got them to work exceptionally well.

The only flaw I found with the entire sheet was for the Ohio subject they did not include fuselage national markings but only for the wing markings. I considered using the other insignias on the decal sheet but found the fuselage markings are smaller in size. I thought of then using the Airfix kit supplied fuselage markings with the Iliad wing markings, but the red in the stripes were totally different shades. What I eventually did for color consistency was just use all the national markings from the Airfix kit decals.

Overall, the decals are excellent in register, color, and subject matter. I would also like to thank Iliad Decals for review sample.