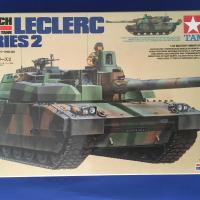 From the Tamiya USA website: This modern Tamiya classic, originally released in 2005, has been updated with plastic road wheel parts in place of the original's die-cast components.

The Leclerc features a 4-stroke V8 diesel allowing a top speed of 72km/h on road and 50km/h cross country, and is equipped with a French-built 120mm, L/52 smoothbore cannon. Series 2 tanks have an air conditioner to cool the computer system as well as several other improvements.

The kit comes packed in Tamiya’s standard, strong box, with each sprue individually packed in its own plastic bag. A nice touch is a folded black and white sheet that provides French tank history and technological data on the various systems that make up this advanced tank. It is repeated in four languages on each page.

The instructions are easy to understand and follow with clear pictures and diagrams. They also feature a parts guide that came in handy. There are 4 marking options including three in NATO colors and one in desert camouflage. The instructions also include where to apply items from a separately available photo etch fret (Item 35280) that includes the driver hatch seal, external fuel tank straps, vent covers, and mesh for the turret basket. Given the price this Leclerc kit sells for, the photo etch fret should really have been included.

It is not needed, but I added some weight to my tank using steel cut off pieces super glued inside the lower hull.

Construction starts with the lower hull, wheel suspension and drive sprocket axel assemblies. The road wheel suspension arms include a jig to help ensure correct alignment so all the wheels will touch the ground. This was the only somewhat confusing part of the build for me. There was a little play, up and down, at the attachment slot in the hull. I picked a position somewhere in the middle and went with it. As it turned out, this position worked well, all wheels touch the ground, and the track fits nicely. The road wheels, idler wheels and drive sprockets are built up next and include nylon sleeves sandwiched between each wheel that the axels slide into.

The front and rear mud flaps had quite deep ejector pin marks that were filled and cleaned up, as well as some big ejector pin marks on the underside of the front sponsons. The tracks hide most of these, but a competition judge would definitely find them!! These were then assembled and attached to the model.

I chose to do the standard NATO scheme. All the wheels are black, making painting quite simple. Before assembling the individual wheels, I painted them tire black and then used a circle template to spray NATO black on the wheels, which saved me a lot of time.

The upper hull and turret followed and I glued various parts to them that would be painted the same colors as the tank. The turret had storage/electronics lockers attached around the sides. The large rear storage bin did not have a back to it, so I built one out of plastic sheet. Tamiya does this a lot, with the obvious thought that the gap between the box and turret would be small enough as to not see into the open space. Unfortunately, I forgot to take a picture of what I did before painting and attaching it to the turret. In my opinion this correction is worthwhile doing. The basket located next to this box is a little fiddly and comes in five parts. I used Tamiya thin liquid cement and adjusted alignment as I went. I painted the smoke canisters and attached these before their outer covers.

Before the turret base is attached, small rectangles have to be cut out of a supplied clear acetate sheet and slotted into each periscope window. The instruction sheet includes templates for each set of window panes. Once installed, I tinted the inside of the panes purple from online references. While it is not difficult, it would have been nice if these windows were pre-cut like I’ve seen in other Tamiya tank kits.

The 120mm smoothbore gun came in two halves. The barrel end was one piece and all fit fine. The gun fits into a slot assembled inside the turret that is meant to make it elevate. This is a nice feature, however the gun rear armor plate is attached to a concertinaed dust skirt that butts up to the turret front. There is no way for the gun to elevate unless the dust skirt is removed. I glued mine in the position the skirt would allow and went on with the build.

The vinyl tracks look good, and for what will be seen, aftermarket tracks should not be required. They were primed with Tamiya grey spray can primer, and then sprayed with tire black. This was followed by rust, steel and other weathering colors. After completion, I pushed the wheels onto their axels, fitted the tracks and glued the side skirts on. The drive sprocket and rear mud flap hide where the two track ends were joined. The track ends can be glued using Tamiya liquid cement.

The hull and turret were sprayed Tamiya NATO black, green and brown, using the instruction’s painting guide as a reference. I rolled poster putty into “snakes” to mask each color and get a slightly soft edge. The rubber skirts and mud flaps were painted tire black. Once I was happy with the camo, a gloss coat was applied for decals, and a pin and panel line wash.

The commander figure was painted by following the instructions. I am by no means a figure painter, but I had fun bringing him to life. Clear goggles are a great addition and I added a strap from tape.

I did not buy the photo etch fret, and made external fuel tank straps from folded over 3M painters tape that I painted light olive green. I also used surplus nylon mesh from another Tamiya tank kit to fabricate the mesh lining on part of the turret basket. I sprayed two antennae’s white using thin wire and glued them into holes I drilled in the kit antenna bases. I have seen pictures of external fuel tank pipes feeding through the fuel tank stays, and I may add these at some point. There are already holes through the stays that will accommodate this. Chrome bare metal foil replicates the rear vision mirrors.

Overall, this is a very nice rendition of the current French AMX Leclerc Series 2 tank. It is not beyond the ability of new modelers, and is a good starting point for the advanced armor builders.

My sincere thanks to Tamiya and IPMS for allowing me to build and review this model.