AMMO by Mig- The Weathering Magazine Issue 33 "Burned Out" 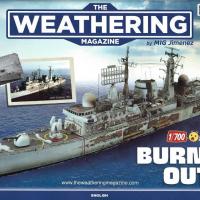 The AMMO by Mig Jimenez series of The Weathering Magazine issues address all modeling genres and focus on painting and weathering techniques for scale models and figures centered on their products. Including great photos accompanied by thorough step-by-step processes in each article, they give builders of any skill level the chance to recreate these effects and build their skills in doing so. Each issue focuses on a specific theme and this time around we look at the effects of fire and explosive forces on the pieces.

After an introduction by editor Sergiusz Pęczek , the articles open with "Ukrainian Rebel" by Kreangkrai Paoiinda. He takes the Trumpeter 1/72 T-72B Mod 1990 MBT and with some aftermarket parts and AMMO´s products recreates anti-tank explosive side hull damage. The descriptions are expansive as he modifies parts to show the damage and the extensive use of pigments and washes to show the ash and soot left over after the road wheels have burned off.

"The Würger is Down" by Lalo Zeleny is up next and shows a crash scene involving Eduard´s FW-190D after being shot down with engine failure. Lalo has done some pretty intricate damage effects-- including removing panels, control surface damage with foil, and bullet marks. An interesting new AMMO product is featured in their photo-etch airbrush stencils for camouflage. He also has an excellent step-by-step of the base he created to represent the corn field that was the setting of the crash.

"Abrams in Ashes" by Ricardo Rivas features a damaged Desert Storm era M1A1 Abrams tank from Rye Field Models. Ricardo modified the road wheels by sanding off the rubber parts of the kit wheels and misshaping them. Most of the major effects illustrated are due to excellent paint techniques showing the burn damage. Once again, there is a SBS of the base and accessories and weathering effects to seal the deal.

Franck Cournede is up next with his article "How to reproduce Burnt Effects on a building". While the article states the building is from Miniart, it does not relate exactly which building was used. However, the article is welcome as the Miniart sets are always very interesting and a SBS of building and adding custom details to them is of great interest to anyone looking to add one of these to a scene. Damage to doors and windows, as well as adding rubble around the building´s base, fill out the article.

"The Fallen Soldier" by Daniel Morcillo shows a creative use of the spare torso from a 1/144 scale GM High Grade figure. Techniques here include inflicting battle damage with a motor tool and using effective paint and weathering work to show the damage to the figure and the setting around it.

Kreangkrai Paojiinda is back again with "Jagdpanzer IV/70 (A) Burned Out" using the DML 1994 No. 6015 kit. Between work on the kit itself and modifying the PE anti-tank screen and the base around it, we see a great piece showing this late war Axis armor that has seen better days.

Closing out the issue is the man himself- Mig Jimenez and "Exocet Inferno- HMS Sheffield Ablaze". Using the Dragon 1/700 kit, Mig successfully evokes the scene showing the sinking of the Sheffield after being hit by an Exocet missile. Using a model tool to simulate the damage, he also uses the photo-etch paint stencil and custom sheet styrene pieces to illustrate the damage of buckled plates and rust effects. Chipping and Oil Brushers round out the effects.

This is another excellent issue from TWM and AMMO and as I stated before, by following the SBS, modelers of any level can up their game and show off damage effects on their pieces from explosive fire effects. The last page of the issue shows that the upcoming issue is centered on the theme "Urban".