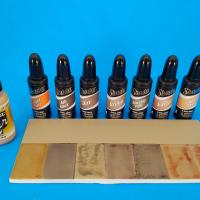 For the 10-15 years, modelers have been enjoying the “golden age of weathering products.” Be it in the form of pre-mixed washes, filters, effects such as mud, dust, grime, streaking, etc., or pigments in all shades, it’s never been so convenient or easy to come up with convincing weathering effects on our models. One of the leading innovators in this field has been Mig Jimenez, who has brought us many of these off-the-shelf, ready-to-use products. Ammo by Mig Shaders are the latest addition to this growing product line.

Mig’s website touts Shaders as “acrylic based paint specially formulated to apply shadows with the airbrush,” which are packaged in handy little 10mL dropper bottles. This review looks at the following Shader colors:

In order to get a visualization of how these products differentiated themselves from other products, namely filters and modulated color series, I chose to apply them all to test coupons of 4 colors most familiar and common to my predominant modeling genre of aircraft, armor, and space sci-fi. Those base color coupons were Flat White (enamel), Gray Primer (enamel), US WWII Olive Drab (acrylic), and Modern US Desert Sand (acrylic). Each color was applied to each coupon in immediate succession with airbrush pressure ranging from 10-20 PSI. Variation in airbrush pressure will be explained shortly.

After creating the sample coupons with the 4 base colors and allowing 3 days’ cure time, each was masked off to preserve the base color on half the coupon, and to allow the first 4 colors to be applied to alternating sections (sections 1, 3, 5, and 7 starting from the left) of the exposed half, while preventing overspray on adjacent sections.

First 4 colors up were Light Rust, Dirt, Starship Filth, and Light Clay. Shooting somewhere between 15-20 PSI, all 4 went down on the enamel White and Gray Primer very nicely, showing good transparent shading properties. Application over the Vallejo acrylic OD and Sand was a different story. Again, in the same continuous airbrush session following the application over enamels, performance of the Shaders over acrylics was markedly different, as shown in the photos. At first, it appeared droplets of Shader formed on top of the acrylic colors, which quickly started to aggregate into puddles. Some Shader colors were more prone to do this than others, but all exhibited that behavior to some extent.

Determined to find out if it was an “acrylic thing” or a “Vallejo formulation thing,” the coupons were allowed to dry for a couple days, then the coupons were masked to facilitate application of the final 3 colors – Ash Black, Grime, and Earth. Before applying the Shaders this time, a barrier coat of Model Master Acryl Flat was applied over the OD and Sand sample areas and allowed to cure. One again, the Shaders laid down nicely over the enamels, but still continued to puddle over the acrylics, this time on Model Master Acryls.

Although the testing could have evolved into application over other acrylics such as Ammo by Mig, Tamiya, Life Color, Gunze, and others, I chose to take the 3 data points and call it a day, as the application of a seemingly simple product was becoming increasingly time consuming and complex.

Another innovative finishing effect series for the modeler’s bag of tricks, Shaders offer potential to add convenient elements of realism to models of all genre. However, given their inconsistent behavior with different finishing systems, care must be taken by the modeler to sufficiently test compatibility with their preferred paints and topcoats before putting a project at risk. Therefore, I recommend Shaders for advanced modelers looking to achieve effects beyond those from traditional color modulation and filters, and who have the time and patience to experiment with product compatibility before application to their “live” projects.

Shaders Over Us Olive Drab Acrylic
Previous Next