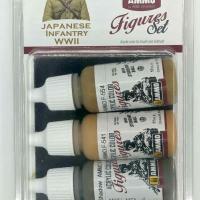 A new, welcome release from prolific AMMO by Mig Jimenez, is this four-color acrylic paint set labelled for World War II Japanese Infantry. The paint comes in 17ml plastic bottles, complete with a stirring ball, in a clear plastic clamshell box. Also included is a color two-sided label with a very well painted World War II Japanese soldier with color callouts for the paints provided. While the paints can be procured individually, the four major colors are included (and most likely cheaper than buying them individually). The following paints are included:

Fortunately, I had a World War II Japanese armor crew ready for paint. A quick reference check showed that the uniform colors are very similar. The paints work very well for brush painting and have a nice translucency about them that layers well. The paints can also be mixed with other colors to get the variations to the painter’s desire. I also painted one of the figures’ uniforms with an airbrush and it performed just as well with acrylic thinner.

The colors appeared to match the samples on the label with the exception of the AMMO F-541 Rust Ochre. This color appeared to be too light, so I had to add some brown leather to get the color to match the example’s leather slings and holster. The Rust Ochre did, however, work well for the flesh tone, once it was diluted with some white. The Pale Yellow for the base uniform appeared too light but darkened up after applying a light filter and a clear coat.

I am very impressed with this paint set and appreciate AMMO by Mig developing colors of lesser covered subjects. While advanced modelers and painters can mix their own colors, nubes like myself prefer the easy off the shelf solution provided in this set. As you can see, the colors worked well on my figures; if only my painting skills matched the quality of these paints.

For anyone wanting to paint Japanese World War II figures, this set provides the four base colors necessary (after all, we should all have the elementary black and white colors on our work bench). I highly recommend this paint set and look forward to painting crews to man the Type 95 Ha-Go, Type 97 Chi-Ha, and Type 2 Ka-Mi models in my stash.

Profuse thanks to AMMO by Mig Jimenez (https://www.migjimenez.com/en/) and IPMS-USA for providing the review sample.

Figures in vehicles
Previous Next