American Privateers in the Revolutionary War 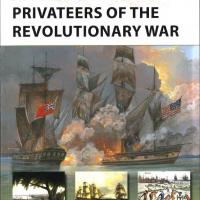 This is a short, easy to read introduction to ships and history of the private warships which played a major part in the American War for Independence. It is profusely illustrated with period artwork and accurate modern-day artwork of actual ships. The artwork by Paul Wright is the standout feature of this book.

Angus Konstam is the author of over 100 history books, most of which have been published by Osprey. A former naval officer and museum professional, he worked as the Curator in both the Royal Armouries, Tower of London, and the Mel Fisher Maritime Museum in Key West, Florida. He now works as a full-time author and historian, and lives in Edinburgh, Scotland.

Paul Wright has painted ships of all types, from sail to steam. He specializes in warships. His work has appeared in the works of Patrick O’Brien, Dudley Pope, and C.S. Forrester. He is a member of the Royal Society of Marine Artists. He lives in Surrey, England.

This book is a fairly basic level introduction to privateers in general and their role in the naval portion of the American Revolutionary War. It covers general information on 18th century naval custom and tradition and how privateers were funded, fielded, and disposed. Konstam covers notable individual privateer captains, owners, and battles.

The text lacks footnotes which is a shame. It detracts from the scholarship of the work. It left me wondering continually from where Konstam was getting his information. The book also lacks ANY documentary credit for any of the artwork and illustrations. This is standard scholarship and authors, as well as publishers should be conscientious about this. This hits close to home as several photographs of mine were published without my permission or documentary credit.

This book is a nice introduction to an oft-neglected slice of 18th century naval history. Unfortunately, it is marred by poor documentation of sources. The twelve paintings by Paul Wright alone are worth the cost of the book.

Many thanks to Bloomsbury for the review copy.