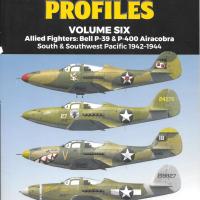 I first discovered this publisher and series at an IPMS Nats a few years ago. As the title says, they specialize in WW2 Pacific aircraft, and do an excellent job covering some lesser-known subjects.

This is a softcover publication, with 120 pages in a nice, high-quality semi-gloss finish and a stiff outer cover. Publishing quality is first-rate, as is the content itself.

The introduction to the book describes the author’s intent, which is primarily to detail and clarify the various markings of Airacobras in the South and Southwest Pacific theater. This contains a brief explanation of the deployment of the type, and some explanations as to the differences between the various models of the P-39, as well as the P-400. The author is very concise and clear in spelling this all out. This is immediately followed by tables showing the various bases used by the squadrons flying the Airacobra in this region, as well as a brief glossary.

This book is aimed squarely at the modeler (or markings enthusiast) and it kicks of with Chapter 1 explaining (and showing) national markings, serial number fonts, and just about all other manner of markings appropriate for the type. All subsequent chapters cover individual USAAF squadrons, going through their deployment and history in-theater, as well as individual markings in detail. Several full-page color side profiles are in each chapter, with detailed descriptions of the subject aircraft, and often photos of the same. USAAF squadrons included (each with their own chapter) are 12th, 35th, 36th, 39th, 40th, 41st, 67th, 68th, 70th, 80th, 82nd, and 110th. The final chapter covers ‘Unique Airacobras’ with photos and profiles covering exactly that. An extensive list of sources and acknowledgements and an index of names finishes off the book.

I can highly recommend this book (and in fact the whole series). This is a well-researched and invaluable resource to any model builder interested in the Airacobras operating in the South and Southwestern Pacific. The markings information is first-rate and inspiring to building something!

Thanks to Casemate for the review copy, and to IPMS for allowing me to review it!