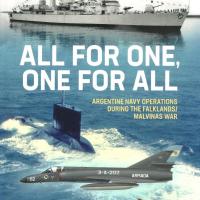 The second section describes the historical role of the Argentine Navy -mainly during the late 1800 and up to the 1960s- when a conflict between Argentina and the United Kingdom was not even included the scenario planning.

In the 1960-1970s, the Argentine Navy developed into a mainly ASW force -under the direction and supervision of the US and ironically, the Royal Navy. It was basically a force oriented towards defensive operations, with limited offensive capabilities although it was the only South American force with carrier-borne strike fighters. Even in the 1970s, a conflict with the United Kingdom over the Falkland/Malvinas was not included in scenario planning and when the Argentine landing in Port Stanley happened, most of the Argentine Navy officers learned about it through the newspapers. The most modern vessels of the Argentinean surface fleet were of British origin and commissioned into service -with help of the Royal Navy- just the year before the war started.

The third section of the book is devoted to explaining the main strategy of the Argentine Navy during the war, which was to play a game of “hide-and-seek” with the Royal Navy. The technological difference between the fleets was such that an open confrontation would have meant catastrophic losses to the Argentine Navy, whose main concern was of potential follow up conflict with Chile.

The surface fleet actions of the Argentine Navy during the Falklands/Malvinas War, which was mainly an approach of “fleet in-being”, was to leave port with the intention of getting the enemy fleet attention but with the goal of avoiding contact. The intention was to “distract” the Royal Navy to force spreading out its defensive assets, to create an opening for the Argentine COAN (Naval Aviation) with its Super Exocet and A-4Q Skyhawks to strike, or for the limited Argentine submarine force to engage the British Fleet. Argentinean submarines engaged twice with British surface vessels, but scored no hits, although the mere threat of modern German-build submarines kept the Royal Navy on its toes during the conflict.

The only exception to the “fleet-in-being” strategy was when the British and Argentine aircraft carriers task forces got within a few hundred miles from each other airplanes from both forces got radar returns from the enemy fleets. Although the Argentine carrier attempted to launch an air strike combined with a raid by Exocet-laden frigates, lack of wind meant the Argentine Skyhawks couldn’t be launched with full bomb load and both sides choose to retreat.

The book also briefly covers some of the lesser-known chapters of the Argentine Navy during the Falklands/Malvinas War, such as the role of the Argentinean Marines in the final ground battles around Port Stanley. Also, the Navy Weapons Engineer Corps, which promptly modified an Exocet missile to be launched from land. A coastal battery of sorts, it was able to score a hit on HMS Glamoran.

The last section brings some interesting analysis on the overall lack of strategic thinking and understanding of the capabilities of the Argentine Navy by the Argentine Military Junta (which ordered the takeover of the islands). During the late 70s and early 80s, the Argentine Navy was considering the possibility of a regional conflict with Chile (with operations in the Southern Pacific) while having the United Kingdom as the main weapon supplier. As such, the Argentine Navy was totally unprepared to fight against the UK around the Falklands.

The last section also highlights some lessons learned by the Argentine Navy,  that a small strike force with modern technology (Exocet missiles and German-built submarines) could hit a much larger enemy fleet. Part of that lesson learned was that a small force can only kept up the fight for so long against a much more powerful enemy.

In summary, this book takes a deep look, not just into the historical events of the Falklands/Malvinas War, but also includes an analysis of the historical Argentine Navy traditions, culture, and scenario planning strategy.

I would like to thank IPMS/USA, Helion & Company and Casemate Publishers for the review sample.