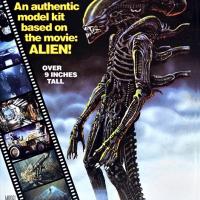 In 1979, Ridley Scott introduced moviegoers to a new genre of cinema, the Sci-Fi Horror film. Set on an isolated spaceship, the film’s spook value was enhanced by minimalist glimpses of the alien life form that picked off the crew one by one. In the final confrontation, it was the determination of the female action hero (and her cat) that enabled her to survive the ordeal and eliminate the threat.

MPC originally released a 1/9th scale model of the Alien creature. I bought my first one from the local Sears department store in Pembroke Mall in Virginia Beach, back in the day when they carried everything. The legs were immobile, with only head at the neck and the arms at the shoulders articulated. From that kit, I started to learn the skills of cutting, re-positioning, and posing figures.

So, in 2013 and 7 movies later, our friends at Round2 have released the original MPC kit that so many of us remember from the days before vinyl, resin, and 2-part putty were mainstream.

Upon opening the box, the modeler is greeted by two main body halves, a clear cranial (head)piece and several smaller sprues with the arms and smaller body bits. Other than the clear headpiece, the rest of your kit is molded in black plastic. The parts are well molded with a minimal amount for flash for a 30+ year old kit.

Starting with the head, which consists of 5 parts, the modeler has a limited amount of movement that can be given to the inner jaws of the creature. After the sub-assembly of the jaws, you close up the cranial halves and top it off with the clear cranial piece.

Proceeding to the arms is a minimal effort since these are two-piece arms. Done! Enclose your three sub-assemblies in the body halves and you are almost done. With that said, set your model aside for the cement to set and STOP!

As simple as this model is (the box states skill level 2), this kit is a great opportunity for you to polish and hone your model-building basics. You will encounter seams that run the length of the body and both arms. Take this time to fill in the gaps and sand your joints smooth. The details on either side of the seams will guide you. Once you are happy that the basics of modeling construction have been satisfied, proceed to add the smaller details – the foot spurs, tail, and back “pipes.”

Now, you are in possession of your 9-inch image of horror designed by the famous Swiss surrealist artist, H.R. Giger. Giger later stated that part of his inspiration is his nightmares, and he traps them on canvas. He really caught a good one here.

Painting your model is where your skills and imagination can shine. You have access to many photos on the internet, as well as the film as a starting place for finishing your model. The film was shot in dark spaces to raise the tension level, and the darkness of the creature enhances that desired effect. In reviewing the film, you’ll see lots of basic black, and maybe some greens, maybe some metallics present on the creature.

The inner jaws of the creature are the lightest colored features on the figure. After assembly, I painted them with a light flesh color and silver teeth, as seen in a scene towards the end of the film when the alien “yawns.” One of the points of discussion about the alien species is that it appears to take on some physical characteristics of the host that it gestates in. The top of the alien creature has a clear top that can be seen in the film and the human skull characteristics are visible on the model. I used an off white acrylic to make the details pop out against the darker base. After affixing the clear dome top, I blended it into the darker finish with Tamiya Smoke to reduce some of the starkness.

Although the alien is basically a man in a rubber suit with a big head (the actor was 7’2” Bolaji Badejo, a Nigerian art student studying in London when filming took place), the modeler can still blend it all together to create an enjoyable piece for his display. I decided to go with the basic black overall color with subtle enhancements here and there. One characteristic of this monster is that it is WET. It drools – everywhere – what appears to be an epoxy-like resin that it builds its lair in, traps its prey in, and generally makes a mess with. So, after the colors were done and dried, I gave this alien a good overall gloss coat and let it dry for a full 24 hours before handling.

I recommend this model to all levels of modeler. It is basic enough for a parent/child build and offers the experienced modeler an item to showcase his finishing skills.

Thanks to Round2 and IPMS/USA for a chance to review this treasure. Pick one up today!