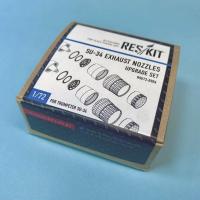 Reskit is an aftermarket parts company based out of Kiev, Ukraine. Established in 2015, their products are a combination of photo-etch and resin parts. Using CAD and 3D printing technologies, the resulting product is finely detailed and builds up into very complex assemblies.

The item reviewed is the Saturn AL-31 engine exhaust nozzle, specifically the AL-31F M2, used in the Sukhoi Su-34 and Chengdu J-20. Looking at images of the other engine sets, (Reskit also makes sets for the Su-27 and Su-30), they appear to be the same, but there are probably very minute differences between the engine variants that aren’t visible from a cursory investigation. Each set comes with two sets of nozzles, each consisting of 12 parts for a total of 24 (with 4 rings on the flame holder on a photoetch fret). Each part is finely cast. You can see from a comparison of the kit parts that while Trumpeter’s parts are quite nice to begin with, and while those would do just fine, the Reskit components just have that additional level of finesse and delicacy that would elevate the model to the next level. Of note are the jet nozzle, which is longer and has little dimples on the tip which are not molded on the much shorter kit part, and the flame holder, which is very detailed and delicate.

The set is tightly packed into a thin cardboard box, sandwiched between two pieces of foam padding. Surprisingly, that was adequate to keep everything intact. Note that to keep the PE fret flat, it was placed underneath the bottom foam pad, so make sure to take everything out of the box to make sure you didn’t miss anything. Part-for-part, the engine set has an additional three pieces compared to the kit – the combustion chamber is broken into two pieces, in order to fit the three-piece flame holder behind the nozzle.

The parts cut off the casting blocks quite easily, thanks to its clever design placing the cuts along hollow areas. The parts are easily separated with a fine razor saw, so just exude gentle pressure as the casting blocks look more solid than then appear. The nozzle is really the only part that requires more work than the norm to saw off, but as it is the front end of the nozzle (and thus recessed in the kit fuselage, and not visible), it does not need to be cut off the casting block precisely. The parts are also keyed to assist with alignment, but the notches are very small, and you’ll notice a very subtle “click” once you rotate the nozzle pieces until they align.

There is one issue to watch out for with this set – the flame holder is very fragile, and needs a lot of time and planning to remove from the casting block. There are no grooves on the block guide your saw blade. You’ll also notice that the flame holder looks more like a bundt cake pan than a basket, and not much like the kit part – I suspect this is the result of 3D resin printing, where the only way to print the flame holder without the shape collapsing is to add some support material in between the spars, so you’ll need to slowly cut away the excess “flash” from the flame holders. That means taking the time to cut out 22 little squares of excess resin, for a total of 44 between the two, between 1mm wide bracers. I managed to break the flame holder three times trying to trim the excess on the outer ring. I believe the best way to do this would be to trim the excess off with a small, very sharp blade off the flame holder while the part is still on the casting block. This gives the flame holder a bit of rigidity while you’re cutting away at the resin, and once the 22 little paper-thin sections have been cut out, the entire ring can be gently sawed of the base. Reskit could have given instructions on how to prepare this part as it took me all night to figure out, and not before I made some really bad mistakes that resulted in my staying up an extra hour to repair the rings. Once you’ve completed this process (and I recommend doing this over four sessions, two sessions per flame holder between the inner and outer rings to give your eyes and nerves a rest), glue the metal flame holder rings to the back of the basket, and drop it over the nozzle.

Incidentally, I have the older Italeri/Zvezda kit, and the parts are an almost perfect fit! If you thin down the interior sidewalls slightly, the nozzles are a drop fit. The kit parts are a perfect fit, so if you’re building both the Trumpeter and Italeri kit, you can transplant the nozzles over, or bum the Trumpeter nozzles off someone who isn’t needing them.

Given the complexity and detail of this set, I recommend this set with some caveats. The most detailed components of this set, which are the jet nozzles and the very fragile flame holder, are buried deep inside the engine nozzle and would not be visible unless one would shine a light into it. Externally, the kit detail is just a tad bit softer than the resin replacement. You will certainly get a much nicer result with this set, but prepared to put in a lot of time and some nerve-wrecking moments to achieve said result. A regular person wouldn’t notice it. A modeler would like it. An IPMS judge with a flashlight will love it. As such, I would recommend this modelers who have some experience under their belt with resin aftermarket parts, and definitely not for a first aftermarket nozzle.

Thanks for Reskit for the review sample.

Contents Out oif The Box