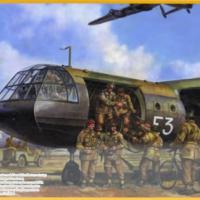 As Wikipedia puts it: The Airspeed AS.51 Horsa was a British World War II troop-carrying glider, built by Airspeed Limited and subcontractors, used for air assault by British and Allied armed forces. It was named after Horsa, the legendary 5th-century conqueror of southern Britain. It had an aircrew of two and normally carried 20 – 25 paratroopers. Originally, it was intended to carry bombs and was designed so that paratroopers could leave the plane while in flight using parachutes. Both of these ideas were eventually dropped and paratroopers were expected to ride the glider all the way to the ground.

Bronco has been spending quite a bit of energy lately in modeling British Paratroopers of the Second World War – everything from figure sets to vehicles to equipment. The Airspeed Horsa is their most ambitious project to date, and boy, is it ambitious! The model is huge, and provides a complete interior from the cockpit all the way to the tail. The completed kit is also designed to be taken apart much like the original craft, with breakaway wings and rear fuselage. These latter items were previously released in a separate set for diorama use, apparently. However, the complete Horsa I was dealing with was not without its challenges, which I will discuss.

First step is the building of the cockpit, which is highly detailed and has that simplistic, temporary look of the original. Next is the main fuselage interior, which can be built either as a full troop carrier or carrier/cargo combination. The cargo/passenger compartment floor goes over a small metal weight to keep this from being a tail-sitter. This chunk of metal came in its own box and looked like it had been sawn off an old office desk, complete with gray crinkle paint. The directions were a bit vague about placement but I found it simplest to glue it to the underside of the floor rather than the belly plate, which prevents it from interfering with the floor installation.

Since I already had Bronco’s commando Jeep completed, I went for the carrier/cargo version, leaving out a couple rows of seats. The roof support struts are a bit vague on placement, so study the drawings carefully – they should frame the small holes in the ribs. The tiny fillets that run along the top of these roof supports were fiddly, to say the least, and I sacrificed several to the Carpet God, both during assembly and during finishing. Fortunately, they’re a very easy shape to duplicate from strip styrene. There were a few shallow pin marks on a few of the ribs, but these were easily dealt with.

The first real hurdle I encountered was painting the detailed interior. Bronco gives zip information on the details, and pictures even on the Internet are a bit hard to come by. Consequently, I initially painted the rear troops seats as if they were tight fabric strung over formers until I ran into some pictures that showed them to be simple molded plywood with no padding whatsoever. Couldn’t have been a very comfortable ride, I’m thinking.

Another issue here was self-imposed – how do you paint and weather an interior for a craft intended to be used exactly once? Admittedly I fudged a bit and permitted myself a bit of shading just to break up the interior green a little. As there are roof sections that can remain removable after completion, I wanted this area to be reasonably interesting. The interior is intended to be sandwiched between outer wall sections and that’s where some of the real challenge lies. Despite a relatively good fit, the very nature of the “skinning” means you’re going to find yourself with some hefty seams to fill. The original aircraft was essentially one smooth surface, so there’s no way to easily gloss over this process.

The tail section is next, and features all separate flying surfaces, and a detail that at first puzzled me. There’s a small openable hatch under the tail and what appears to be a prone gunner’s position. The hatch itself is molded clear and Bronco said nothing in the instructions to enlighten me regarding this. It was only after looking for blueprints on the internet that I located some information - apparently this feature would permit someone with a Sten gun to fire at enemy fighters closing in on the stern from below. Another gunner’s hatch – whose presence also puzzled me at first - is located in the center of the upper wing section with the same intent. Whether these were ever actually utilized in combat is a matter for conjecture, of course.

The wings are next, and the problem I encountered here was the central wing section, which has large skin sections to add both top and bottom. These were not a particularly good fit, jutting a bit out from the main surface despite my best efforts. Considering the size of the moldings, I wasn’t too surprised by this issue, but it did require quite a bit of filling and sanding to get them to lie even. The outer wings are separate components (like the original) but need to be glued into position if you want to build the whole enchilada. There isn’t enough support to permit them to be attached and removed – just a single locating peg. It does seem a shame to hide so much of the interior spar work, though. If you elect to assemble the entire aircraft intact as I did, you’ll find that the mating surfaces for the wing sections are comparatively small versus their overall size. I was intending to install some bracing strips, but the internal ribs prevented this. Once again, some vigorous sanding is called for. Despite the fact that the original was designed to split into three pieces like the model, every picture I studied shows an absolutely seamless finish. I can only assume they taped any seams on the real vehicle before painting. Like the tail, all flying surfaces including the flaps are separate.

The installation of the rear to the front section of the fuselage is somewhat easier as there is a nice attachment lip that simplifies this process. Conceivably, this break point can be retained if you want to show the fuselage split. Otherwise, it’s simply a matter of filling and sanding until everything has a smooth finish.

That process completed, I began adding the details. One issue encountered was the side windows – all twelve of them. Each is composed to two pieces; the clear lenses and a square opaque surround. The windows are simply butt joints to the surround, so extreme care is required to glue them in without smearing them. The windows also have a slight curve to them so aligning them in their frames can be a bit of a trick. Bronco provides masks for the round windows, so it would have been infinitely easier if they had simply made each assembly one clear piece. Oh well. In any case, take your time here as it’s easy to make a mistake. I intended to make the wing assembly removable (for storage purposes) and discovered that the main landing gear is rather flimsy and really needs the wing bracing to maintain its shape. Consequently, I elected to keep the main wheels removable so that disassembled, the belly rests on the sturdy skid rather than the main gear.

Then on to the painting. As these were essentially all “factory fresh” I kept external weathering down to a minimum, simply doing a little shading to try and suggest the ribs underlying the fabric. Bronco includes masks for the canopy and porthole widows as well as several that, to be frank, were lost on me. I haven’t a clue what they were supposed to help with and Bronco doesn’t clarify their use in their instructions. Oh well. The decals provide three finishes – two British and one American, which are essentially identical. However, they look very good and went down well. There was some significant silvering on those that were supposed to be on the black finish. Fortunately, they responded pretty well to Microset.

The kit offers four different side-hatch options along with some beautiful slide-mold loading rails for loading a vehicle. At this point it seemed reasonable to insert Bronco’s commando jeep into the fuselage, and boy, do I see why they went for the hinged cockpit on the Mark II! Assuming the two separate kits to both be dimensionally correct, squeezing a jeep in through the main hatch must have required master-level driving skills. I was barely able to wrestle my jeep model into the interior. However, after some tense moments, I did manage to accomplish this and it looked perfect. I then added the few final details such as antenna to the exterior and that was that.

So overall, what’s my opinion? I’ve looked at quite a number of pictures of the real Horsa on the Internet (as well as the box art) and Bronco seems to have completely missed the rippled “fabric over wood frame” look of the original, which is a shame for a model of this size. As the surface is completely devoid of detail (for the most part) it looks a bit bald to me and frankly, loses a bit of its appeal because of that. Still, no one can argue that the final model is anything but a Horsa.

Although I elected to build this kit for the review as an intact aircraft, others may (and perhaps should) elect to model it in “its natural habitat” – that is, on the ground in pieces after its single flight. If I ever have a chance to build a second one of these charmers, that would be my choice, as it would look spectacular in a diorama. I’m a bit surprised that Bronco didn’t broaden the appeal of this kit somewhat by including the few parts necessary to convert this to the Mark II, which featured twin wheeled nose gear and that hinged cockpit for easier equipment loading. Still, it’s a remarkable model of a remarkable aircraft. As always, my thanks to both Bronco and IPMS/USA for the opportunity to add this fascinating vehicle to my collection. Happy modeling!