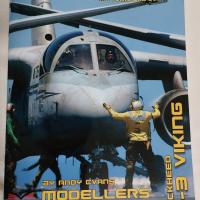 Phoenix Publications is a partnership of four people whose combined experience equals over 100 years working in both the aviation and modelling press. After so many years working for others, we have come together as equal partners in this new venture, with each partner bringing their own unique talents.

This is a soft bound edition in European A4 size (8¼ by 11 5/8 or 210 x 296 mm) with a gloss front and rear cover. At only 38 pages this is far from an exhaustive treatise on the S-3. But it does have some interesting information. The book contains 9 chapters; Briefing, Modellers Walkaround, In Detail – Airframe, Viking Gallery, Colour Side Profiles, Model Guide #1, Model Guide #2, Model Guide #3, and Model Guide #4.

The first section, Briefing, is six pages of development, operations, and retirement, along with 6 photographs of the aircraft. While the text provides good information on each topic, I found the writing very choppy, bouncing from one subject to another in no particular order. The first paragraph is a general introduction to the S-3 Viking. The second paragraph is a general statement on service life of the S-3. The next three paragraphs briefly summarize development of the aircraft. However, half way through the last of these three paragraphs we jump back to a description of the airframe. The first part of the sixth paragraph discusses the crew, crew access and their stations. While the latter half discusses operations. This type of jumping from topic to topic continues throughout the section.

The Modellers Walkaround section is two pages consisting of nine detail photographs of features of the S-3 with location arrows referenced to one of the models that appears later in the book. The photos are of the tailhook, canopy, rear seat side window, wing fold, right main landing gear, wingtip ECM pod, left side hard point with an AGM-84 Harpoon missile attached, a front view of one of the engines showing the intake fan, and a view of the front portion of the right-side engine showing the jet intake danger markings.

The In Detail section presents 23 photographs of various parts of the aircraft over four pages. While the close-up photos show a wealth of detail, some are so close it is difficult to tell where on the aircraft the image is located.

The Viking Gallery section presents 16 photographs of actual aircraft from different squadrons. Nine of the pictures are from the left (port) side, four are of the right (starboard) side, and three are angled views (two from the front, one from the rear).

This section is followed by the two-page colour side profiles. There are three gray over white S-3A profiles and three all gray S-3B profiles.

The final four section are Modelling Guides #1 thru #4. Each guide has a discussion and some build photos of an S-3 model. As well as photos of the finished model. All the models are in 1/48 scale and each is done by a different builder. Three of the four models are the Italeri (former ESCI) kit from the 1980’s. Guides # 1 and #3 use the same S-3A/B Viking kit, while the Guide #4 is the electronic surveillance version the ES-3A “Shadow.” It is interesting to see the difference in Guides #1 and #3 as the first builder (Guide #1) uses a number of aftermarket details to replace kit parts, while Guide #3 is an out-of-the-box build. Guide #4 also uses aftermarket enhancements. Modellers Guide #2 uses the 1994 AMT/ERTL S-3A Viking as its base. The only add-on is an aftermarket set of decals to model the aircraft President George W. Bush used to fly onto the USS Abraham Lincoln in 2003 to make his “Mission Accomplished” speech. It is pretty much an OOB build substituting only a Scale Aircraft Conversion metal landing gear set and Reskit wheels.

While a far-cry from in-depth look at the S-3 Viking this publication does have some useful information. And at approximately $11.00 it won’t break the bank. While the choppy text of the briefing section is distracting, a fair amount of useful information is presented. The Walkaround and In Detail images are useful for any modeler looking to detail an S-3. The Colour Profiles are useful, but only if you are modeling an aircraft from one of the six squadrons shown. And finally, the Modellers Guide sections are nice to see how different builders approach a project of (almost) the same subject.