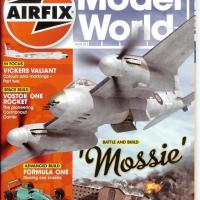 Editor's note: This magazine is also available as an "Ap" for i-Pad; as are Tamiya Magazine and the AFV series.

Let me first say that, prior to getting these review copies, I have never read any issues of Airfix Model World. I must admit, many of the model magazines out of the UK look the same to me at first glance, and I made the mistake of lumping this one in with the rest.

The format is very similar to the other UK model magazines – high quality glossy cover from stiff stock, and glossy pages. To me, this is where the similarities stop. I read each of these issues cover to cover, and have to say I honestly enjoyed them all. Each of the articles was in-depth, well-written, and accompanied by many photos. Quite often I have seen that magazines tend to run very short articles (in terms of text), that often leave me wishing I had more. Not so here.

Each issue has a similar breakdown, and I’m guessing this holds constant throughout the run. Build/Review articles tend to cover at least one each of a vehicle, aircraft, ship, space item, and a figure. All manufacturers’ kits are represented – not just Airfix (despite the name of the magazine). Each issue may not have every subject included, but there seems to be a good representation of the various categories. In addition to these ‘standard’ articles there are “Battle and Build” articles covering the historical aspects of a subject, followed by at least one build article on the same subject. There is also an “Advance Build” article, where someone really goes to town on a build. The subjects in my issues ran the gamut here from aircraft to racing cars. There also appears to be an “In Focus” (non-model) article in each issue, covering a specific subject – this subject in four of my issues was the Vickers Valiant colors and markings.

Another series of articles (which seem to appear in most issues) are titled “Skills School” – each one highlighting a specific ‘skill’ or technique, such as natural metal finishes or biplane rigging. Again, what impressed me most was the in-depth nature of these articles. The rigging article spanned 2 issues, and each one had several pages devoted to the text. Many issues also have a “Basic Modelling” article – covering just that.

Finally, there are the ‘standard’ brief articles covering new products, model shows, etc. I did notice that the new product area for decals seem to highlight some of the lesser-known manufacturers, which I liked to see.

I recently had let 2 subscriptions I had to some other UK model magazines lapse, as I was becoming more and more unimpressed with their build articles. Having a chance to review these has changed my mind. I truly did enjoy and find value in these.

I can heartily recommend these magazines to just about any model builder. Thanks to IPMS and Airfix Model World for allowing me to review these, and for opening my eyes to a new (to me) publication.